IT DOES HAVE A HEMI IN IT 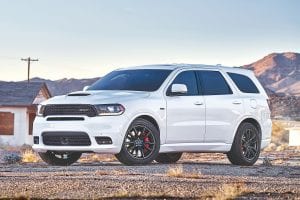 For the first-time ever, SRT power is now available in the Dodge Durango. The 2018 Dodge Durango SRT is powered by the potent 392 cubic inch HEMI V-8 engine with Fuel Saver Technology that delivers 475 horsepower at 6,000 rpm and 470 lb.- ft. of torque at 4,300 rpm – providing America’s best horsepower and torque ratings making the new Dodge Durango SRT the fastest, most powerful and most capable three-row SUV.

Assuring maximum performance under extreme conditions, the 2018 Dodge Durango SRT has been validated through rigorous 24-hour track durability testing – a testing standard that every SRT vehicle adheres to. 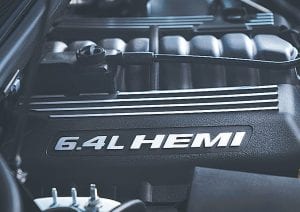 Additional parameters integrated into the control strategy include vehicle speed control, electronic stability control interaction and temperature. The result is automatic shifting that is ideally attuned to the performance requirements of any performanceoriented driving demand.

When the driver downshifts, the “rev match” function uses the engine controller to blip the throttle which provides optimal transition between gears for improved performance and greater stability when downshifting at the traction limit.

When placed in “Sport Mode,” the transmission reduces shift times by up to 50 percent versus Auto Mode and delivers 65 percent of the engine’s torque to the rear wheels.

The new driver-oriented electronic T-shifter provides the driver with intuitive gear selection and offers an Auto Stick selector gate for added control. Drive and Sport shifting can be selected with no effect on the chosen suspension, stability control and driveline torque split settings. The 2018 Dodge Durango SRT features launch control, which mimics a professional driver’s inputs to optimize performance by bringing engine, transmission, driveline, stability control and suspension together for an optimal launch and consistent straightline acceleration. 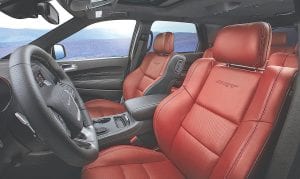 The new exhaust system has been tuned to offer an unmistakably deep, high-performance note that is distinctive to Dodge/SRT and provides a lasting impression. To achieve this iconic exhaust tone, engineers have replaced the rear mufflers with resonators to increase overall sound level and improve tone of the true performance 2.75-inch dual exhaust system.

The 2018 Dodge Durango SRT is built at the 3-million-square-foot Jefferson North Assembly Plant (JNAP) in Detroit, which has been the site of Durango production since its introduction in 2011 model year.