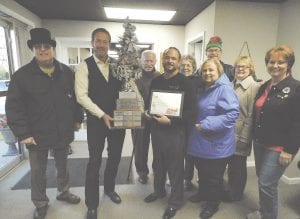 Tim Bright, holding trophy, and Jared Whittey, holding certificate, of LPL Financial, received the Genesee County Small Cities and Villages Association traveling trophy this year. The GFWC – Swartz Creek Women’s Club selected LPL on behalf of the Small Cities Association, which awards the trophy to the most festive business in town. LPL gets bragging rights and the opportunity to display the major award for one year. The Women’s Club chose Bright and Whittey for their wall of lights at the southwest corner of Miller and Morrish roads. Whittey said he and his business partner worked more than six hours to hang 35 strands, each measuring 80 feet long, for a grand total of 7,500 lights. And although those little lights weren’t twinkling, they ended up on a lot of people’s Instagram pages, Bright said.