‘Jack and the Beanstalk’ brings family fun to county 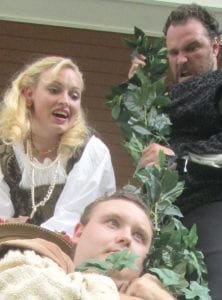 FLINT — Once again Flint’s Kearsley Park Players take their fairy tale theater for children and families to parks and playgrounds across the city and county.

“Jack and the Beanstalk” is this year’s fairy tale and the large cast features many local performers including Justin Wetenhall as Jack, Amber M. Dillard as Jack’s mother, Victor Galea as the wizard, Jessica Eldridge as the giant’s wife and Matt Szukhent as the giant. The cast also includes children as young as three. The 30-minute show is perfect for young children and fun for the whole family.

“Jack and the Beanstalk” opens at Kearsley Park on July 9, at 7 p.m.

During the day on July 10, the company will take the play on the road, performing at a variety of day camps, child care centers and totlots around the community. Friday night, “Jack and the Beanstalk” will come to Linden County Park (at CloverBeach)fora7pmperformance.

The show comes to a close on Sunday, July 12 with performances at the McKinley Park (at Thread Lake) on Flint’s south side at 3 pm.

Admission to all performances is free Please bring your own lawn chairs everywhere except Kearsley Park.