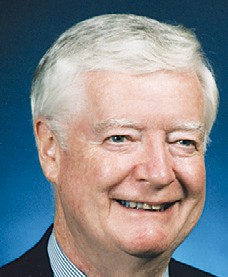 Jim graduated from St. Stephen School in Port Huron and was quickly drafted into the US Army to serve during WWII. Upon discharge from the Army, Jim began college and in 1951 graduated from the Michigan State University School of Journalism. That same year Jim started with The Lapeer County Press working as an ad salesman and reporter. Jimís career at The Lapeer County Press spanned the next 25 years, becoming the paperís editor in 1960. In 1976 Jim began his 20- year career as the “Back Page Columnist” with the Detroit Free Press. Jim retired in 1996.

During Jim’s career he earned numerous honors for newspaper editing and column writing. In 1953 and 1963 Jim was awarded the Michigan Press Association’s “Best Column” award. In 1980 he was awarded the Harriett Taubman Feminist of the Year Award (an honor he personally held in dear esteem). In 1981, 1982 & 1983 Jim earned the UPI’s 1st Place Column Award and in 2009 Jim was inducted into the MSU State News Alumni Hall of Fame.

Jim was preceded in death by his parents and 3 brothers-in-law: Bill Fitzgerald, Jack Dixon and Al “Gabby” Hartnett.

Per Jim’s wishes, cremation and a private family memorial have already taken place.

Our family serving yours for Generations www.muirbrotherslapeer.com