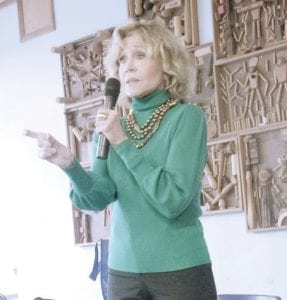 Actress, author and activist Jane Fonda said this is the most important election she has ever seen. Photos by Tanya Terry

BURTON — Three dollars and fifty two cents is the current minimum wage for tipped workers in the state of Michigan.

Seventy percent percent of tipped worker in the U.S. and 80 percent in Michigan are women.

“They suffer from three times the poverty rate as the rest of the U.S. work force,” said Saru Jayaraman, author and co-founder of the Restaurant Opportunities Centers United (ROC) at a rally Oct. 27 at Southwestern High School. “

They use food stamps and have the highest rates of sexual harassment of any industry because when you serve at a restaurant and you live completely off your tips, you have to tolerate whatever the customer does to you,” Jayaraman added.

There are seven states including Minnesota in which restaurants now pay the full wage and tips are on top. 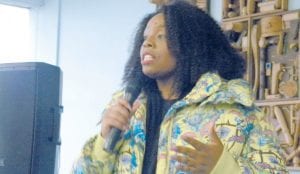 Terese Cullors, cofounder of Black Lives Matter, said this country has built itself on racism, sexism, homophobia and transphobia.

She said when you pay people an actual wage the economy does better because those individuals are able to spend money.

“These same criminals, and let’s say criminals, who deny people access to water are the same people who have been trying to steal workers’ wages and tips,” Jayaraman said. “They tried to pass a rule in the United States making tips the property of owners rather than workers. We mobilized 400,000 people to stop that and we got a congressional bill passed saying now and forever tips will be the property of workers.”

Jayaraman said people needed to come together and vote.

Actress, author and activist Jane Fonda said on one of her last visits to Michigan, there was an event in U.S. Representative Keith Ellison’s mother’s home, and there was a man there from Flint who said “people aren’t voting in a lot of communities, including Flint because they feel their votes don’t count.” 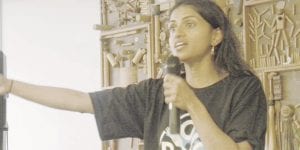 “Boy, I can understand why you would feel that way,” Fonda said. “He also said there was money on the street in communities like Flint to hire local organizers to go out knock and on doors and get people to vote during Obama’s first campaign, and then zilch. So, that was when we decided we were going to come and travel around Michigan.”

The 80-year-old activist said this is the most important election that she has ever seen. She also said she believed there as precedence showing it would be illegal to purposely not allow One Fair Wage on the ballot and for it to be made into law only to allow it to be changed.

“If they do it, we’re going to take them to court,” Fonda said. “So, get everybody you know to come out with you and vote and then stay out. We have to keep this going.”

Terese Cullors, co-founder of Black Lives Matter, said we have to keep fighting like our lives depend on it because they do.