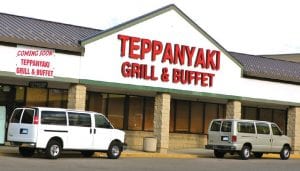 The sign is up announcing the soon-to-open Japanese-style restaurant taking over the former Old Country Buffet site.

FLINT TWP. — “Hiring now” and “Opening Soon’’ on the building and menu signs posted in the windows herald the coming of the Teppanyaki Grill and Supreme Buffet, 3583 Miller Road, in the Genesee Crossing Shopping Center.

The 10,450 square-foot site has been undergoing extensive renovations for several weeks.

It was previously occupied by an Old Country Buffet restaurant for at least 17 years until it closed in mid- January. OCB was one of 81 underperforming locations shut down in a chainwide restructuring by Minnesota-based Buffets Inc., which filed for Chapter 11 bankruptcy protection for the second time in four years.

But unlike other vacancies along Miller Road, the site was only vacant a few months. Teppanyaki’s site plan review received township approval a couple of months ago.

Noting it among new businesses at the township’s Economic Development Commission meeting on May 30, Tracey Tucker, economic enhancement director, described Teppanyaki as a hibachi-style eatery where patrons select their food then have it grilled similar to set-ups at bd’s Mongolian Grill also on Miller Road and Sagano Japanese Bistro and Steakhouse on Linden Road.

New owners could not be reached for comment, but advance publicity describe Teppanyaki as having something for everyone—Chinese, Italian, American, Japanese, Chinese and sometimes Mexican foods—on its supreme buffet.

But, its foremost element will be the Teppanyaki style grill where customers chose their own meats, vegetables and sauces and have it prepared right in front of them by a Teppanyaki style chef.

The menu is said to include more than 250 buffet items, a large salad area and sushi bar. Kid favorites such as pizza are also on the menu.

Teppanyaki also will offer a large private room that can be reserved for events such as business luncheons, wedding rehearsal dinners or parties.