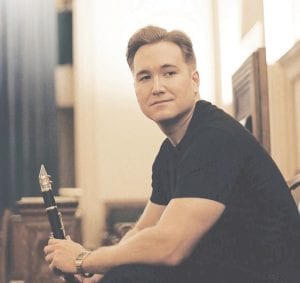 FLINT — Clarinet virtuoso Dave Bennett does not fit the mold of a “typical” clarinet player.

For starters, he names Alice Cooper, Stevie Ray Vaughan and Chris Isaak among his top influences. He’s also equally conversant with the music of Benny Goodman (the “King of Swing”) and Roy Orbison (“The Soul of Rock and Roll”).

Bennett, a jazz clarinetist who plays electric guitar, piano, drums and vocalizes, will be bringing his versatile repertoire to mid-Michigan when he joins the Mott Community College Jazz Ensemble for a concert on April 23.

“Bennett is a top flight clarinet player in the Benny Goodman tradition who plays all over the United States and, lucky for us, just lives in the Clarkston area,” said Franklin Yon, director of the MCC Jazz Ensemble. “Some who have seen him through the years say that you’ll never hear anyone better, and I would agree.”

Bennett is a Mack Avenue Records artist. His 2013 CD “Don’t Be That Way” met with critical acclaim, and his second release, “Blood Moon,” which features five originals and six pop/jazz covers, hit No. 24 on the Billboard Jazz chart in 2018.

In addition to his recording work, Bennett has covered music from the Swing Era to early Rockabilly and Country. His “Tribute to Benny Goodman” shows have toured across the country, including Nashville, Detroit, Rochester NY, Omaha, Toronto, Vancouver, Orlando, San Antonio, Jacksonville, Portland, OR and Portland, ME and Houston.

Bennett has been a featured soloist at Carnegie Hall with The New York Pops (2013) and has played with 35 other American and Canadian orchestras. He made his European debut in 2008 at the The Bern Jazz Festival (Switzerland) in a combo with jazz legends and Benny Goodman band alumni guitarist Bucky Pizzarelli and vibraphonist, the late Peter Appleyard.

Bennett’s concert with the MCC Jazz Ensemble will be held in the auditorium of the Mott Memorial Building at 7 p.m. on April 23. The show is free and open to the public.