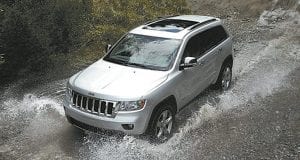 It was a “three-peat” for the Jeep Grand Cherokee at the New England Motor Press Association’s (NEMPA) annual industry dinner, when the vehicle was named “Official Winter Vehicle of New England” for an unprecedented third consecutive year.

The Grand Cherokee snapped up two separate awards, and brand leader Mike Manley was also singled out for honors.

Vehicles are chosen based on how they meet the specific needs of New England drivers, who face some of the harshest winter driving conditions in the nation.

With the “Winter Vehicle” award, the Jeep brand earned a total of three significant honors at the recent event: • Manley, president and CEO, Jeep Brand, received the 2013 NEMPA Executive of the

Wheels TV “Previously Owned Vehicle of the Year” award. • And the Chrysler team had even more to smile about before the evening was over –

“Congratulations to Jeep Grand Cherokee, our first-ever three-peat winner, for one of the most successful remakes of a vehicle in American history. And Ram 1500 4×4 is the benchmark of the full-size pickup segment with its refinement, capability and efficiency.”