JEEP CHEROKEE NAME IS BACK 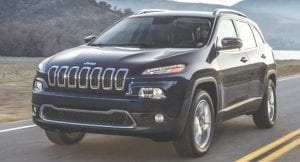 After an 11-year absence, the Cherokee name returns to the Jeep brand in time for the 2014 version’s grand reveal at the New York International Auto Show March 27-28.

Chrysler stopped producing the Cherokee in the United States, Canada and Mexico in 2001, replacing it with the Liberty.

The popular mid-size sport-utility continued to be known as the Cherokee in Chrysler’s other global markets, explained Chrysler spokesperson Kathy Graham.

“The Cherokee is returning,” she said. “The name is instantly recognizable – it’s the most capable mid-size SUV in the world, but for 2014 it’s also going to have great on-road dynamics and greatly improved fuel efficiency compared to the Liberty.”

According to Chrysler, the all-new 2014 Jeep Cherokee will feature an impressive 45 percent jump in fuel economy, as well as enhanced on-road driving characteristics compared with the out-going Jeep Liberty mid-size SUV.

The 2014 Cherokee is slated to arrive in dealer showrooms in the third quarter of this year.