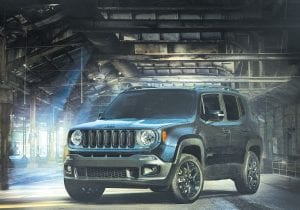 FCA US LLC and Warner Bros. Pictures are joining forces in a oneof kind co-branded partnership to mark the premiere of the highly anticipated debut of Batman v Superman: Dawn of Justice (opening nationwide in theaters on March 25, 2016). The unique alliance includes the introduction of the all-new 2016 Jeep Renegade Dawn of Justice Special Edition (available now in dealerships across the country), in addition to branded television spots with the Jeep and Dodge brands, and social/ digital extensions creating consumer engagement leading up to the film’s premiere next month.

“Thanks to an extensive brand and product portfolio, we were able to address every automobile need for the movie including Jeep, Dodge, Chrysler, FIAT, Alfa Romeo and Maserati, and from our sister company CNH Industrial, Iveco heavy-duty commercial vehicles,” said Olivier Francois, Chief Marketing Officer, FCA Global. “With much of the film’s production taking place in our own backyard of Detroit, our ability to creatively collaborate with the WB team reached new heights. The product integration was so organic to the filmmakers’ vision and storyline, all we had to do was incorporate scenes from the movie for our commercials.” 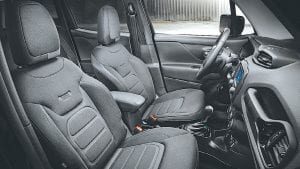 “Our partnership with Warner Bros. and the highly anticipated Batman v Superman: Dawn of Justice film allows us to expose the Jeep Renegade and its best-in-class capability to an incredibly vast audience,” said Mike Manley, Head of Jeep Brand – FCA Global. “The new Jeep Renegade Dawn of Justice Special Edition boasts a unique, dark appearance package for the most capable small SUV that we’re confident consumers – including millions of moviegoers – will love.”

The advertising campaign launched this week, with the Jeep brand debuting a 30-second commercial “Into the Storm” across television and online. The spot features footage from Batman v Superman: Dawn of Justice of Bruce Wayne (Ben Affleck) behind the wheel of the Jeep Renegade. The commercial speaks to how he feels compelled to move toward danger rather than run away from it. Opening on city street ruins, the narration by actor Jeremy Irons, who portrays Alfred in the film, speaks to that impulse: “You’re not afraid. You like chaos. The madder, the better (as Bruce Wayne is seen driving toward the destruction in the Jeep Renegade — navigating its way in the mayhem). And in these times, we need that. We need you to rush in when everyone else is running away.” 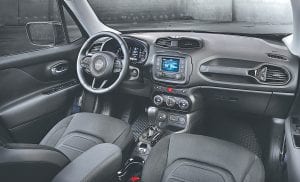 The cockpit of the 2016 Jeep Renegade Dawn of Justice Special Edition.