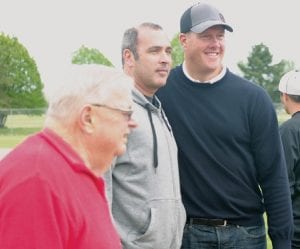 FLINT— Jim Abbott is an inspiration to us all. Born without a right hand, Abbott defeated difficult circumstances to become a top-tier Major League Baseball pitcher, playing 10 seasons for the California Angels, New York Yankees, Chicago White Sox and Milwaukee Brewers, and even threw a no-hitter for the Yankees in 1993. The former University of Michigan star and Flint Central graduate was back in his hometown on Saturday to host the Run, Pitch & Hit youth camp at Broome Park.

“It feels great to be home,” said Abbott. “It was a great turnout today, and it’s great to see young players out here excited about baseball. (My favorite part is) seeing the kids out here. Yesterday we were at the boys and girls club, and I had a chance to see some of those opportunities that they have over there, and seeing the kids come out here today and hitting the ball, throwing the ball, running; it was the highlight of my whole trip.”

The camp, which began at 10 a.m. on the main baseball field of Broome Park, seemed to attract many young ball players from all over the county. The age ranges were vast and wide, and it was not limited to baseball either, as several local girls’ softball players attended the camp, as well.

“It seemed like we had youngsters from probably five or six-years-old, all the way up to middle school and ninth grade,” continued Abbott. “I couldn’t tell you the exact ages, but we had boys and girls. A couple of them smoked the ball all the way out there to the middle of center field. Everyone seemed to have fun, that’s for sure.”

The event organizers were able to gather sponsors, preventing the local kids from having to pay a registration fee to attend the camp. “The boys and girls club set it up,” added Abbott. “Morgan Stanley was one of the sponsors. I think (the money) was all taken care of.”

All-in-all, Abbott’s camp turned out to be a huge success, but there wasn’t much doubt about that heading into it. The kids really seemed to be enjoying themselves, and stuck around for awhile after the camp concluded to continue to work on their fundamentals, or to just get a picture with, or an autograph from the local legend. The main question at the camp’s conclusion, however, was will this be a recurring event?

“I don’t know, this is the first time we’ve ever done it, so I think everybody will take stock,” concluded Abbott. “I live in southern California, and I’m not here all of the time. But I’ll tell you, it was the highlight of my trip to see the kids out here, and see them swinging the bat, and trying to hit it as hard as they can. I loved it.”

Abbott moved on to the Flint Public Libraryfora2p.m.booksigningofhis recently released Imperfect: An Improbable Life, where he enjoyed catching up with past teachers, mentors and friends.