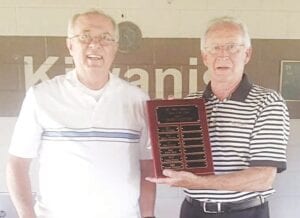 SWARTZ CREEK — Swartz Creek Mayor David Krueger has selected Jim Florence as the recipient of the 2019 Miller’s Settlement Citizen of the Year award.

Florence, formerly a member of the Swartz Creek City Council, is active in many community organizations, including the United Methodist Church, the Kiwanis Club and the Swartz Creek Area Senior Center.

In addition to the City Council, Florence has served on the city’s Planning Commission, Zoning Board of Appeals and Parks and Recreation Advisory Board.

“In these roles, Jim has brought his calm, positive, and well-respected voice, thereby effecting change in his community in the most meaningful of ways,” Krueger said.

Florence has been involved in a diverse array of community improvements.

He was a member of the Friends of Elms Park group that planted trees throughout the park in 2014 to restore the canopy damaged in an infestation of emerald ash borers.

As a member of the Kiwanis Club, Florence is instrumental in making sure the club’s signature, annual fundraiser – the Art in the Park art show – goes off without a hitch, providing a lovely day of art, entertainment and food. He also has been actively involved in the Kiwanis’ croquet club.

Florence and his wife, Elma, often can be found at the Senior Center, which they joined in 2004. Florence spent many years as president of the senior center board.

“(Jim) was quickly recognized as a great leader and was nominated to serve as president,” the mayor said. “Jim was instrumental in the expansion of the senior center.”

At the church, he serves as building manager, member of the Men’s Club and trustee, and he handles marketing and communications. He has pitched in on grill duty during the Men’s Club’s semi-annual chicken barbecues, and he was among the many church members who helped refurbish the playscape at Elms Park last year.

“Not a day goes by when Jim does not get a call about something that could use his attention,” Krueger said.

In presenting the award, Krueger said Florence is “an example of the far-reaching effects of what one person with a tenacity for community can do.”

“I feel very blessed,” Florence said of receiving the honor.

Florence is a U.S. Army veteran, serving from 1960 to 1962. He worked in supervision at General Motors for many years while living in Flint. The Florences moved to Swartz Creek in 1998.

The Citizen of the Year award is named in honor of Miller’s Settlement, the forerunner of what is now the Swartz Creek community.