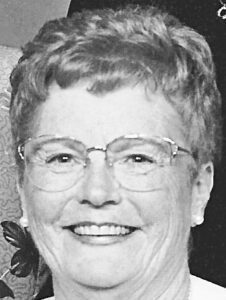 JOANN ALICE RUHALA, 90, of Burton and Flint, died Friday, July 9, 2021 at Regency of Grand Blanc. Honoring her wishes cremation has taken place. Mass of Christian Burial was celebrated at 12 noon Wednesday, July 14, 2021 at St. John the Evangelist Catholic Church, 404 Dayton St., Davison, Fr. Andrew A. Czajkowski Celebrant, with private burial in Crestwood Memorial Gardens. The Family received visitors from 11 a.m. Wednesday until time of services at the church. Those desiring may make contributions in her memory to St. John Catholic Church Memorial Fund or Christian Charities.

Joann was born in Flint, Michigan on December 1, 1930, the daughter of the late Ray & Alice (Hatt) Oberley and has resided in the Flint area most of her life. She was joined in marriage to James Ruhala on September 24, 1949 in Flint. Joann was a graduate of Clio High School Class of 1948. She was a member of St. John the Evangelist Catholic Church, Davison. She enjoyed music and was formerly a member of the Sweet Adeline’s; she also loved to quilt and spent numerous hours doing crossword puzzles. She was employed by Dr. James Pawloski DDS for over twenty seven years, and continued to work for several other Doctors after her retirement.

Joann had a great love and devotion to her family and especially her loving daughters and grandchildren. She leaves to cherish her memory her husband of seventy-one years, James; daughters, Judith Ann Ruhala, Deborah Joann Whitt and husband Robert, Diana Lynn LeBlanc and husband Paul. She also leaves her six grandchildren, 13 great-grandchildren, and a host of extended family and friends. Joann is preceded in death by sister, Betty Matthews; and brothers, Gilbert Oberley and Robert Oberley. Please share your condolences at www.hansenfuneralhome.net