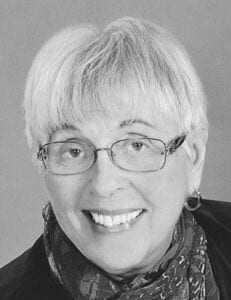 JOANNE PURO, 87, of Burton, passed away on Tuesday, January 26, 2021, at Ascension Genesys Hospital. Cremation has taken place. A Memorial Mass will be celebrated 2 PM, Friday, February 5, 2021 at St. John the Evangelist Church, 404 N. Dayton Street, Davison, 48423. Rev. Fr. Andrew Czajkowski, celebrant. A live-stream of the Mass can be viewed at facebook.com/stjohndavison Burial of cremated remains will take place at New Calvary Catholic Cemetery at a later date. Family will receive visitors from 12 Noon until the time of the Mass at the church. In lieu of flowers, memorial contributions may be considered to the St. John Music Ministry.

Joanne Marie McDermaid, was born in Flint, Michigan on August 2, 1933, to Roy and Agnes McDermaid (O’Neill). Joanne was the oldest of three daughters. During her childhood, she spent many summers on the O’Neill Family Farm in Downeyville, Ontario. Joanne attended St. Mary’s Catholic Grade School before graduating from St. Michael’s Catholic High School in 1951. Joanne graduated from Our Lady of Grace Mercy Nursing School in 1954 and started her career as a homecare nurse. Starting in the mid-60’s, she worked in a variety of positions at St. Joseph’s Hospital in Flint, before retiring, from her final position, as a surgical prep nurse for heart surgeries, in 1997. She considered her final position to be the most difficult yet rewarding position of her career. Joanne married Donald J. Puro on January 31, 1959 in Flint, MI. Together they raised six sons while living in Mt. Morris and Burton. Joanne was preceded in death by her husband Donald in May 1998, sister Patricia Landskroener (McDermaid) in May 2006, brother-in-law Thomas Landskroener in March 2001, brother-in-law Paul S. Puro in August 2008, and Daughter-in-law Janelle Puro (Vondrasek) in July 2013. Spirituality and family were always at the forefront of Joanne’s life. Joanne was a parishioner at Flint Holy Rosary and St. John’s in Davison. She also served as an organist for the church and choir. Joanne had a passion for classical music and was a regular attendee at concerts by the Flint Symphony Orchestra and Flint Festival Chorus of which Donald and son Michael were members. Joanne was well known for her sharp mind and listening skills. She was an avid bridge player and an enthusiastic, if not vindictive, Euchre player. Most of all, Joanne enjoyed spending time with her family, extended family in Canada, and close friends. Her warmth, love, and support will never be forgotten.

Joanne is survived by her sons Michael Puro, Paul (Carrie) Puro, James Puro and Barbara Keston, Daniel (Anne) Puro, John Puro and Shelly Dumler, Thomas (Marisa) Puro, Sister Fran Read (McDermaid) and husband Ron of Westland, MI. Joanne also leaves behind 12 grandchildren, 7 great-grandchildren and numerous cousins, Nieces and Nephews in both the United States and Canada. The family would also like to extend a special thank you to the nursing staff at Ascension Genesys, 2 South Acute Telemetry. The care and compassion they provided Joanne, in her final days was greatly appreciated.