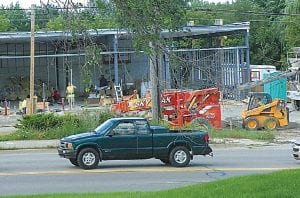 Photo of building under construction Photo by Rhonda S. Sanders

FLINT TWP. — Seems it’s been a while since there was new construction on Corunna Road but the building now going up just east of Dutcher Road is the future home of an O’Reilly’s Auto Parts store.

Site plans approved by the township Commission in February allow for a 7,500 squarefoot building with a brick/stone facade, a brick belt on the sides and brick pilasters.

The site at 4234 Corunna Road formerly was occupied by a CARQUEST Auto Parts store but that building was torn down a few years ago.

Hiring has not started yet but a new store typically has five to ten team members, partand full-time, Merz said.

The store manager is the first hire and usually trains at an existing store, he said.

Other jobs include parts specialists, counter staff to help retail customers, stockers and drivers who deliver parts to professional installers.

Anyone interested in a job at the store can go directly to the company’s web site to file an application, Merz said, noting that should indicate the location of the store they want to work at.

The Corunna Road store is one of 170 that O’Reilly’s plans to build this year. It will offer a full selection of parts — from oil to starters to alternators and chassis, Merz said. Other typical services at most O’Reilly stores include used oil and battery recycling, battery testing, and a loaner tool program.

O’Reilly’s operates about 82 stores in Michigan including two in the Flint-area at 3483 West Pierson Road and 3316 South Dort Highway.

Overall, the chain operates 3,570 stores and 23 distribution centers in 38 states and ranks among the top three auto parts distributors in the United States with $5.4 billion in sales for the year ending 2010, according to financial information posted on its web site.