Johnny Winter blows into town for Blues, Brews and Bar-B-Que 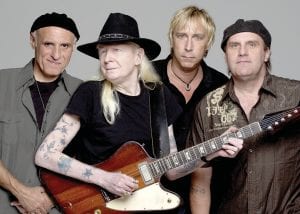 FLINT — One of the top Texas blues guitarists will get the crowd rocking when Johnny Winter comes to The Whiting March 25 for the Blues, Brews & Bar-BQue event.

Known for his signature guitar slinging style, Winter and his current bandmates, which he has been with for 10 years, will perform songs from Winter’s record-winning career, which spans more than 30 years.

“We’ll be playing all different songs from the albums,” Winter said in a phone interview of his upcoming stop in Flint. “Everybody needs to come out and have a good time.”

While he has spent countless hours recording albums, Winter said he prefers live performances, such as the upcoming Whiting show, the best.

“I like live performances better. I’d much rather play live,” he said. “It’s fun to have people enjoy what you’re doing.”

Over the decades, Winter has played across the globe, and has some favorite spots.

“I really like Amsterdam a lot. There is a larger fan base in Europe, but we do pretty good here in the States,” Winter said. “I like the States the best. I like playing for the people as long as they enjoy me playing.”

Winter first signed with Columbia Records in 1969 and immediately became noticed for his fresh take on classic blues. Throughout the 1970s and 1980s, Winter was concerned the “unoffical torch-bearer” for the blues, championing and aiding the careers of his idols, including Muddy Waters and John Lee Hooker.

His recent, Grammy nominated album, “I’m a Bluesman,” was produced on Virgin/EMI records. Winter recently signed a two-album deal with Megaforce Records and is currently in the studio recording tracks for the first album of the deal.

“The working title on the album is ‘Roots’ because it’s all songs that have influenced me,” Winter said.

The biggest influence on his career has been blues legend Muddy Waters, and Winter cites his collaborations with Waters as “a dream come true.”

“He’s my all-time favorite, and he was just a great guy and a lot of fun,” he said. “It was great to play with him.”

All of the songs on his upcoming album are covers, and Winter said he expects the album to be released in six months. “There will be 12 or 13 tracks. I picked all of the songs myself,” he said. The album will also feature many guest artists.

While his fan base is mostly the 50 and over crowd, Winter is winning over a younger audience to his music. “There is a lot of new generations of listeners, a lot of young kids,” he said. “People come to the shows and bring their kids and grandchildren.”

Along with Winter, Blues, Brews & Bar- B-Cue will feature local favorites, The Rusty Wright Band. “Sweet Willie Tea” will give the pre-show performance.

DETAILS: Cost for performance tickets ranges from $15-37. Those interested in the all-inclusive package, which includes the show, a barbecue buffet and live entertainment can get tickets for $45- 67. To purchase tickets call The Whiting Ticket Center at 810-237-7333 or 888- 8CENTER. Tickets also can be purchased onlline at www.thewhiting.com