Johnson, Miller take oaths of office for Carman-Ainsworth School Board 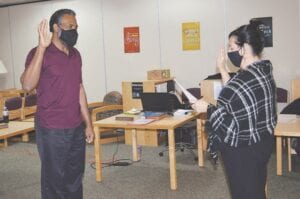 FLINT TWP. — At its first meeting of 2021, the Carman- Ainsworth Board of Education conducted swearing-in ceremonies for incumbent Trustee James Johnson and incoming Trustee Todd Miller.

Johnson, a longtime Carman-Ainsworth School Board member, has served as treasurer and president on the board in years past and is currently the President of the Genesee County School Board Members Association.

In recognition of his efforts as a school board member, Johnson has been honored with the Michigan Association of School Board’s “Award of Distinction” and was selected to serve on a legislation committee that approves, rejects or modifies Senate/House bills that pertain to Michigan schools.

In addition to his board duties, Johnson volunteers around 300 hours a year to teach and/or mentor for non-profit and for-profit originations. 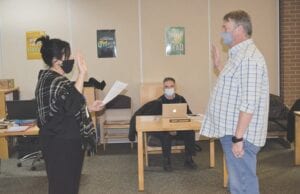 Both Johnson and Miller will serve six-year terms ending on Dec. 31, 2026.

Board members also voted to re-elect Gary Cousins as President; Lonney Jarnigin as Vice President; Lisa Koegel as Secretary; and Gloria Nealy as Treasurer. Crystal Dahl will serve as a trustee alongside Johnson and Miller. — B.G.