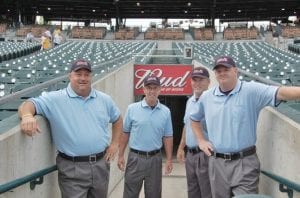 Steve Johnson, second from left, was part of a crew that umpired the 2010 All-Star game at Comerica Park.

Johnson, who was diagnosed with diffuse large B cell lymphoma on June 15, was presented with the first ever Steve Johnson Professional Excellence and Community Service Award.

“I was so overwhelmed, tears came to my eyes right away,” Johnson said.

Johnson has been an official with the Michigan High School Athletic Association for 40 years. He has officiated football, basketball, baseball and softball during his tenure.

As a teenager Johnson had dreams of becoming a professional baseball player. Those plans changed dramatically one fateful day when his All-Star team from Flint played an All- Star team from Saginaw.

“He threw me three straight curves that I thought were fastballs my first time up,” Johnson said. “After that, I bunted my last three plate appearances.

“That told me right there if this was what pro pitching is like, I wanted no part of it.”

After his ordeal batting against Sorenson, Johnson decided that being an official was another way to stay close to the games he loved. So he became an official and began working games in 1970.

Johnson took an eight-year hiatus from officiating when he moved to Las Vegas in 1978. He worked as a dealer at both the Golden Nugget and Tropicana casinos, but he never truly cut his ties with sports.

He wrote sports for both the Tropicana newspaper and another paper that covered all the casinos. He ran into such sports dignitaries as Muhammad Ali and Sugar Ray Leonard during his stint in Vegas.

“I still have a couple of those things hanging on my wall,” he said.

But once his kids were born, Johnson decided to return home to Michigan in 1986. He felt Michigan was just a better place to raise his family.

Once he came back to the state he returned to officiating. Since then, Johnson has worked games all over the state. It’s a safe bet if someone names a school, Johnson has been there.

“You name the school and I’ve done a game or six there,” he said.

Johnson has been a part of crews that have worked 13 state championships. But his most memorable game was not a state final.

It was the game before the finals in 2004. That night the atmosphere was electric when Drew Neitzel’s Wyoming Park squad lost to Detroit Renaissance in the state semifinals.

“It was a sellout crowd,” Johnson said. “The Breslin Center was filled with 14,750 people.”

Johnson hopes to experience more games like that in the future. But for now, his disease has put him on the sidelines.

Johnson just completed his first round of chemotherapy. He will go through a total of 18 weeks of treatment to try and eradicate the cancer.

The first round of treatments has taken its toll on Johnson. Doing what most people consider to be everyday things has been difficult for him.

“It’s a struggle to even drink a glass of water,” he said.

Still, Johnson remains optimistic. He feels that once the chemotherapy is over around Christmas time that he’ll be able to return to officiating.

“My goal is to get back to the way my life used to be,” Johnson said. “I say it’s the bottom of the ninth but I still have one at-bat left.