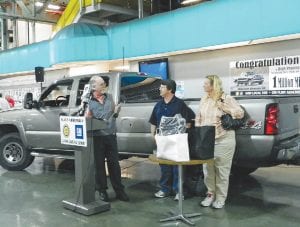 Hugh and Tammy Pennington of Delton were invited to the Flint Assembly Plant in May 2012 for a special recognition of their Flint-built Chevy Silverado surpassing one million miles on the road.

FLINT TWP. — It took only six years for Hugh and Tammy Pennington of Delton, who were driving for a living, to rack up a million miles on their 2006 Chevrolet Silverado truck that was built at the Flint Assembly Plant. The couple were guests of honor during a special recognition of that milestone at the plant in May 2012.

Now General Motors is looking for more million-milers like the Penningtons.

As part of GMs Back to the Bricks activities, the Flint Assembly Million Mile Club is being created to recognize people who own vehicles that were built at Flint Assembly and have logged 1 million miles or more.

Since it opened in 1947, Flint Assembly has built more than 13 million cars and trucks, including the first Corvettes, the iconic Bel Air and, more recently, full-size pickups, according to a press release.

Owners with a Flint Assembly-built vehicle that has 1 million miles or more are being asked come to Flint Assembly Aug. 12 for a Open House, where they will receive a commemorative plaque from the plant. Advance registration and mileage verification are required.

Flint Assembly will kick off three days of events during Back to the Bricks week in Flint with the free, public Open House where visitors will get an inside look at how GM’s popular pickups are assembled.

It also will showcase GM’s operations in Genesee County, where 7,500 employees build engines, design dies, stamp parts and support a vast network of GM dealerships. Attendees will also get a chance to test drive new GM vehicles. The event runs from 8 a.m. to 5 p.m., with plant tours taking place between 9 a.m. and 2 p.m.

In 2011, more than 10,000 people toured GM’s Flint operations in a one-day open house. Flint Assembly, 3100 Van Slyke Road, attracted more than 5,000 of those visitors. Since then, the local UAW-GM team has staged a Summerfest event each June for the community. This year, the UAW-GM Summerfest event was moved to Aug. 12 to highlight the improvements that total more than $1 billion at the Flint Assembly plant.

The Back to the Bricks fun will continue for two more days – Aug. 13 and 14 – with the GM Pinewood Derby at Thomas Appliance, 5600 S. Saginaw Street in Grand Blanc. This will be the third year for the Pinewood Derby, during which GM will give away 500 Pinewood Derby cars to boys and girls from Genesee County.

The Pinewood Derby event is free and runs from 5-9 p.m. Aug. 13 and 14 during the rolling cruises that are part of the annual Back to the Bricks event. Volunteers from the Water and Woods Field Service Council, Boy Scouts of America, will be on hand to help children build and race their Pinewood Derby cars.

As for Back to the Bricks, GM’s role has expanded to include Buick as the lead sponsor for the annual cruise and show, which features thousands of classic cars displayed in and around Flint on Aug. 15 and 16.

For information about Back to the Bricks activities, visit www.backtothebricks.org/schedule/index.htm.