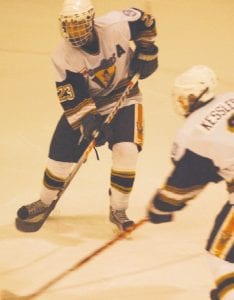 Joe McAuliffe (23) had an assist in the Junior Generals’ loss.

FARMINGTON HILLS — How does a hockey team outshoot its opponent by 16 shots and lose by six goals?

The Flint Junior Generals showed it could be done last Saturday, losing to the Michigan Mountain Cats, 8-2, despite outshooting them, 40-24.

Flint was tied with the Farmington Hills team, 1-1, early in the second period on a goal by Brendon Szczepaniak assisted by Tyler Kennedy and Goodrich’s Joe McAuliffe at 2:33.

But Farmington poured in six goals on 15 shots over the rest of the period to take command at 7-1.

Flint tallied a shorthanded goal by Shane Totten, unassisted, at 12:55 of the third, but the Mountain Cats answered two minutes later with the game’s final goal. Farmington goalie Schuyler Ferguson ended with 38 saves.

The Junior Generals slipped to 12- 18-0-2 with their fifth straight loss in the North American Tier 3 Hockey League. The good news is, they play 11 of their final 13 games at home, including the next five. Flint will host Queen City at 7:20 p.m. Friday and 2:20 p.m. Sunday.