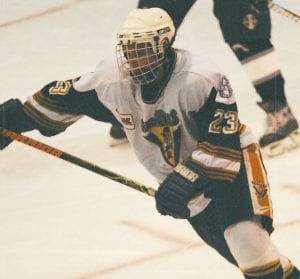 Joe McAuliffe of Goodrich is a returning veteran for the Flint Junior Generals, who play on weekends at Flint Iceland Arenas.

Pittsburgh jumped on Flint in the first period of the first game, scoring five goals while outshooting the Generals, 28-7, in the period.

The Penguins made it 7-0 in the second period before Flint got on the board with third-period goals by Jacob Taylor at 37 seconds and Charles Chamberlain at 5:51. Andrew Lay of Swartz Creek assisted on the first goal.

Flint outshot Pittsburgh 36-28 in the last two periods, but still gave up three more goals in the last 12 minutes of the game.

The Generals hung with Pittsburgh a little longer Sunday, tying the game 1-1 in the first period on a Chamberlain goal assisted by Lay. The Penguins pulled away to a 3-1 lead by the end of the period, but Flint pulled back within 3-2 on Caleb O’Brien’s goal 3:17 in the second.

Chamberlain tallied his second goal at 12:46 of the second, but by then the Generals trailed 5-3 and didn’t score again until the final goal of the game, by Conner Enciso at 11:12 of the third.

Flint is 0-5 in the Central States Hockey League and goes on the road to Quad City this weekend. The Generals’ next home game is at 2:20 p.m. Oct. 17 against Battle Creek.