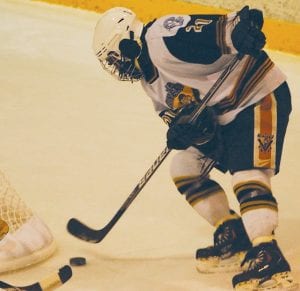 Warren Carter had a goal and four assists in the weekend sweep.

FLINT — The Junior Generals enjoyed one of their most dominant weekends of the North American 3 Hockey League season, sweeping the Metro Jets, 6-0 and 5-3.

Flint outshot the Jets, 50-18, Saturday at Iceland Arenas, and Peter Emery stopped all 18 Metro shots to post the Generals’ first shutout of the season. Shane Totten had two goals and two assists and team scoring leader Andrew Lay had two goals and an assist to lead the offense.

Totten got it started with 17 seconds left in the first period on assists from Lay and Caleb O’Brien.

Warren Carter connected just 47 seconds into the second period on assists from Charles Chamberlain and Alexander Truran. Lay then scored both his goals in the same period, the first on a powerplay assisted by Totten and Derek Kessler at 13:07, and the second one short-handed on passes from Totten and O’Brien at 19:04.

Truran made it 5-0 at 5:18 of the third period on assists from Chamberlain and Carter, and Totten finished the scoring at 13:44 on passes from Conner Enciso and Nicholas Szalacinski.

Each team was assessed 38 penalty minutes on 11 infractions, with two fights between Flint’s Joe Larson and Metro’s Morgan James leading the parade.

The Generals kept up the pressure Sunday at Lakeland Rink1, outshooting the Jets, 32-15, in the first two periods.

Szalacinski gave them a 1-0 lead in the first on a pass from Carter at 8:19. Metro tied it, 1-1, just 54 seconds into the second, but Flint took the lead for good at 2:33 on Stephen Hibbard’s goal off passes from James Odom and Mason Bohlinger. Totten added a powerplay goal at 6:44 assisted by Encisco, and the Generals iced the game with two goals in the first 1:49 of the third. Bohlinger scored on a pass from Carter, and Enciso connected on assists from Carter and Chamberlain to make it 5-1.