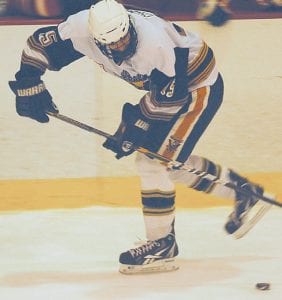 Charles Chamberlain had three goals and two assists for the weekend.

FLINT — The Junior Generals shook off a painful defeat Saturday night and stormed back Sunday to score a narrow victory in their weekend series with the Chicago Hitmen.

Flint lost Saturday’s game, 3-2, when Chicago scored two powerplay goals in the last 2:39 at Iceland Arena. Less than 17 hours later, the Generals retaliated with a 4-2 victory over one of the top contenders in the NA3HL. The Hitmen are tied for fourth place, three points out of first.

The Generals led Saturday’s game twice, first on Charles Chamberlain’s powerplay goal at 5:52 of the first period on assists from Caleb O’Brien and Goodrich’s Joe McAuliffe. Chicago tied it, 1-1, on a short-handed goal just 3:14 into the second period, but Flint regained a 2-1 lead at 18:05 on Warren Carter’s goal off passes from Chamberlain and Austin Giblin.

The Generals got back on their skates Sunday and gutted out the victory despite getting outshot, 44-38. Chamberlain again started the scoring on a powerplay goal assisted by O’Brien and Carter at 3:45 of the second period. Swartz Creek’s Andrew Lay made it 2-0 at 7:29 on passes from O’Brien and Shane Totten. Lay hit the 50-point mark for the season with his 23rd goal to stand fifth in the league scoring race.