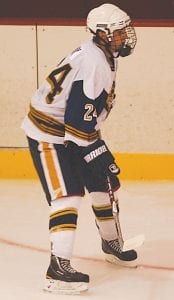 But Toledo outshot Flint, 16-5, in the third period and scored twice, including an empty-netter with 43 seconds left. Conner Enciso, Mason Bohlinger and Tyler Kennedy had assists on the Generals’ goals, and Austin Willenborg made 42 saves in goal.

On Sunday, the Generals fell behind, 1-0, after one period, but scored two goals in the first 75 seconds of the second period to take the lead for good.

Charles Chamberlain extended Flint’s lead to 3-1 at 5:04 of the third period on another assist by Lay and one by Christian Liatos. Battle Creek tied it less than two minutes later, but Szalacinski scored the deciding fourth goal at 13:12 on assists from Alexander Truran and Liatos.

Battle Creek pulled within 4-3 at 15:17, but Flint held on behind Andrew Habasevich, who made 25 saves.

Lay extended his team lead in scoring with 18 points, on nine goals and nine assists. Carter is second with 12 points.