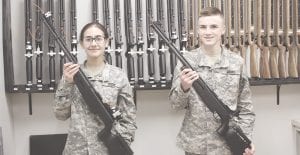 Savannah Belling, left, 15, of Goodrich, and Connor Kendrick, 15, also of Goodrich, are part of the marksmanship team at the JROTC program. Photos by Gary Gould

GENESEE COUNTY — Junior Reserve Officers Training Corps (JROTC) may be a path for many into the military after high school, but it is also a proven way to instill leadership, team building and self-discipline among its young recruits.

The JROTC is in its third year at the Genesee Career Institute, G-5081 Torrey Rd., and the ranks of the program have swelled to almost 200 students from across 21 Genesee County school districts.

LTC Curt Lapham, of Flushing, one of the instructors of the program, said last year JROTC had 58 seniors graduate the program and 54 of those graduates are today either in the military or at college working to become officers.

“Some are in college on fullride scholarships, some are in the National Guard or Army Reserves to help pay for their college,” said Lapham. “Cadets went into all branches of the military last year, even though the Army sponsors the program they can go wherever they want – or not at all.” 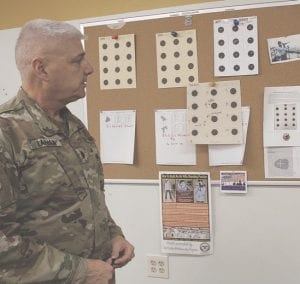 He said two of the graduates who didn’t go on to the college or military are working for their fathers in family businesses and the other two were employed at the Genesee Career Institute in janitorial services and now are going to Mott Community College.

Lapham said the program puts a strong emphasis on what the cadet does next. What’s their plan and how do they make this plan a reality?

View Newspapers recently sat down with the cadets from the Black Knight Battalion’s Charlie Company and asked them about their experience with the JROTC program.

Damon Smeltzer, 17, from Carman-Ainsworth High School, said he joined the program because ever since he was little, he’d thought about joining the military and pursing it as a career.

“I didn’t really know what wanted to do after high school, but once I got my acceptance letter (to JROTC) it went right from the back of my mind to the front,” he said. “I was like, yes, this is what I needed to do. It was a calling, really.” 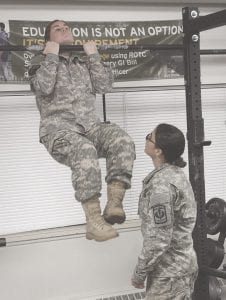 Cadets demonstrate the equipment in the JROTC fitness room.

For Cadet Hanna Wohl, 17, of Flushing, she joined because she belongs to a military family.

“I knew I always wanted to serve,” she said. “People recommended this program to me.”

Cadet Morgan Headley, 17, of Grand Blanc High School, pursuing her dream of being a military lawyer prompted her to join JROTC.

Cheyenne Mills, 17, from Goodrich High School, said she joined program because she too was interested in the military, but had no knowledge of what it was all about. Her stint with JROTC has given her first-hand knowledge of what a military career will be like before she pursues it.

“I am tiny, and this can be quite intimidating,” said Mills. “But it helped to build my confidence and has pushed me more.”

Isiah Vorhies, 17, from Linden High School, said he thought JROTC would be a lot of drill instructors “screaming and yelling” at the cadets, but said he found it’s nothing like that.

“Everybody is close, like family,” he said. “We watch out for each other and take care of each other.”

Cadet Dyson Boham, 17, from Goodrich, said JROTC exceeded his expectations and has helped teach him leadership and responsibility, while Dion Smith, 17, from Carman-Ainsworth, said he enjoys the structure of the program and the fact the cadets all follow the Seven Core Army Values: Loyalty. Duty. Respect. Selfless Service. Honor. Integrity. Personal Courage.

Lapham said the cadets are at the JROTC for two hours daily, taking the rest of classes at their home schools. Some cadets come back for Delta Company, he said, which is an extended day. JROTC is a four-year program, he added.

There are other JROTC programs around the state – in some 30 high schools and two county programs (Jackson and Genesee) – but Lapham said he considers the Genesee program to be the best.

“As the cadets travel around, they learn how privileged they are to be in Genesee,” he said. “We have fabulous facilities compared to some other programs. This is more like an academy, where they can explore a career opportunity for them. It’s quite different than the normal high school model”

Lapham said the Genesee Career Institute’s JROTC program is more on the career and technical education side.

“Skills, leadership and character development are the core responsibilities of a value system we have,” said Lapham. “This program includes physical fitness skills, rifle safety, first aid, general career planning and learning about government and the Constitution.”

Cadets describe their days at JROTC as being filled with learning, training and structure, but they also learn discipline and character building. Students are given responsibilities for themselves and for their squad where they learn not only to take care of themselves, but to watch out for the rest of their team.

As cadets grow, they are given more responsibilities and they earn promotions through their achievements.

Lapham said there are some aspects of the program that are derived from military training like physical fitness, drills and marching.

He said students do receive a historical perspective of the U.S. military and there are activities like marksmanship and a cavalry unit.

Last year, the Genesee Career Institute’s JROTC were the state champions in rifle competition. Of the top five places in the competition, the Black Knights help first through fifth place in the standings. First place in the competition gave the winner a $1,000 scholarship and a chance to try out for the military marksmanship team, which is the core of the U.S. Olympic team.

“We use the same equipment as the Olympic team,” said Lapham. “We have the best equipment we can possibility have; it gives us one up on the other high school teams.

He then added, “Maybe I’d like to say coaching helps, but the equipment really, really matters.”

The program also has a cavalry unit where cadets can learn how to saddle, ride and care for horses. They have horses for the program, kept at an off-site stable and the students go there to practice weekly.

Lapham said the cavalry is just another way for cadets to learn discipline, character development and to learn about responsibility.

Referring back to Mills’ earlier statement about her size, Lapham added, “This person who says she is tiny is mighty when she’s on her horse. She’s a great horseback rider.”

Students in Genesee County, said Lapham, have opportunities that are cutting edge and that don’t exist otherwise. For the JROTC program, he said he is impressed by everything the Genesee Intermediate School District has given the program in the way of equipment and facilities.

“We use the same equipment as the U.S. Army marksman team, the same targets and rifles,” said Lapham. “It’s the best our country can provide, and I think this community has provided the best they can provide for students – and that wouldn’t be just in my program, but all the programs.”

On top of that, the GISD is constructing a $3.5 million field house at the Genesee Career Institute to give the JROTC even better facilities to work with.

The cadets from Charlie Company all agree that anyone interested in joining the JROTC program should do so.

Headley said when she joined, she was discouraged at first because she was the only girl from her school who was enrolled in the program

“I was a little discouraged at first because not a lot of people understood what I was doing. They didn’t take it seriously,” she said. “But I noticed there are more female cadets this year and some of them came up to me and said I was reason they joined. It’s really nice and comforting to know that what you do can help other people open up and come out of their shells.”

Lapham said the number of female cadets in the program doubled this year, in part because of role models like Headley, Mills and Wohl.

Mills suggested anyone who wanted to join, but was hesitant, to just “get over it and do it.”

“Even if you’re not interested in going into the military, it still changes you as a person,” she said. “I’ve noticed, only being here a short time, that I’m a better person. It makes you think about other people and gets you ready for after high school.”

Smith and Smeltzer both agreed anyone interested in joining should do it.

“It will change you for the better,” said Smith. “I was shy, I hated talking especially in front of a group. But it gives you a better perspective – makes you resilient.’

Smeltzer said he thinks experience is always the best teacher and adds he doesn’t think anyone would regret joining.

“You’ll find who you are, find your professionalism, find your work ethic,” he said. “It will make you want to be a better person.”

For Vorhies, he said it taught him about self-worth and respect. For Bohm, it helped him overcome shyness.

Cadets are also given some community service projects to take on during their time in the program. Lapham said they learn about giving back to the community. On Veterans Day, Nov. 11, they will be on the ice at the Flint Firebirds game to hold up a giant American flag.

On Dec. 14 they will be the labor force partnered with the Patriot Guard to lay wreaths at the Great Lakes National Cemetery in Holly. Last year, Lapham said, the cadets helped lay 18,000 wreaths.

At the end of last school year, the cadets sent packages to soldiers in Afghanistan, with the financial help of the GISD and the GCI principal. They sent more than 100 packages overseas.

Just last weekend the cadets were on hand at the Color Walk at the Ligon Center after their Saturday morning training, to help staff the event.

Lapham said the afterschool events are all on a volunteer basis, and while grades do not depend on the community service, promotions to leadership positions do.

“We want them to know life is about more than one’s self,” he said. “This program demonstrates we have motivated young people, who will in turn be motivated citizens.”

“(The crest) is unique to this program,” said Lapham. “It’s not what you say, it’s what you do that is important.”