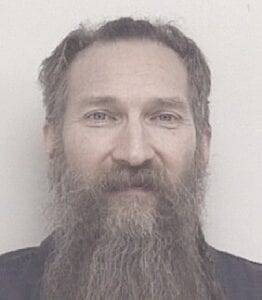 CORUNNA — The case against Mark D. Latunski, the man charged in the grisly Christmas Eve slaying of Kevin Bacon of Swartz Creek, has been bound over to Circuit Court in Shiawassee County.

On Friday, Oct. 23, prosecutors presented their evidence during a preliminary hearing before District Judge Ward L. Clarkson who then ruled that the evidence is sufficient to indicate that a crime occurred and the 51-year-old suspect committed it.

The standard of proof during a preliminary hearing does not reach the burden of “beyond reasonable doubt” that is required in trial.

The case now proceeds to 35th Circuit Court where Latunski will stand trial or enter a plea. Latunski is facing an open count of murder and one count of disinterment or mutilation of a dead body. He is represented by attorney Douglas E. Corwin Jr., who was appointed by the court.

Latunski was scheduled for a pretrial conference Friday, Oct. 30.

The search initially began in the area surrounding the plaza on Miller and Seymour roads, where Bacon’s car was found. A search of his cell phone records led investigators to Latunski’s home in Bennington Township, near Morrice. There, they discovered Bacon’s remains in a secret room in the basement.

During the preliminary hearing, detectives provided gruesome details of the scene, as well as interviews with the suspect.

Latunski was ordered to undergo psychological testing and was initially found not competent to stand trial. Oct. 5, after reviewing new reports from psychiatrists at the Center for Forensic Psychology, Clarkson ruled that Latunski is now competent, meaning he can understand the charges against him and assist in his own defense.