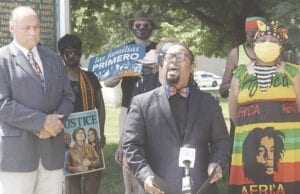 From left, Genesee County Clerk John Gleason, Dr. Kent D. Key and Claudia Perkins-Milton at the June 19 Juneteenth commemoration in Flint. Key was the keynote speaker at the event.

FLINT — “None of us are free, until we are all free,” was the message delivered to a small gathering on the lawn of the Genesee County Circuit Courthouse on June 19 the commemorate Juneteenth.

Juneteenth is the oldest nationally celebrated commemoration of the ending of slavery in the state of Texas on June 19, 1865, even though the Emancipation Proclamation had formally freed them 2 ½ years earlier.

Texas was the most remote of the slave states with a low presence of Union troops, so the enforcement of the Proclamation was slow and inconsistent to enforce.

Genesee County Clerk John Gleason hosted the event, where several speakers used the opportunity to talk about recent protests and unrest from the alleged killing of George Floyd, a Black man in Minneapolis, by a white police officer.

“We’re gathered here because the people across this nation and the globe are saying ‘we’ve had this conversation too often’,” said Gleason. “We’ve never reached the culmination or completion of freedom for our brothers and sisters. There has not been universal acceptance.” 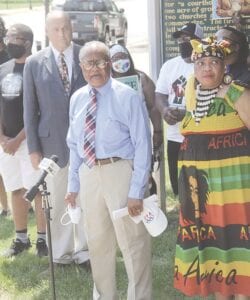 The keynote speaker for the event was Dr. Kent D. Key, of the Michigan State University of Michigan, College of Human Medicine.

Key talked about Juneteenth but asked the question about how the celebration was significant to current events of today.

“Juneteenth is a celebration of liberation from the inhuman conditions of slavery in the United States institution of slavery,” he said. “But we cannot talk about slavery and not talk about racism. For racism is the core and is at the heart of slavery. It is the blueprint for which our United States systems, policies and governance has been created.:

Key went on to say he thinks racism is embedded in our constitution and has evolved into something called systemic racism.

“Racism is at the core of racial inequities and disparities,” said Key. “You can look at education, housing, transportation, employment…all of these things are impacted. The legal system and, of course, the law enforcement system. These are all racial disparities that play out in communities of color, more than anywhere else, in this country.”

The Emancipation Proclamation, he said, ended the physical oppression of African-Americans, but he said Blacks are still oppressed. To change the words of the constitution, but not dismantle the systems that same constitution put in place still equals racism, said Key.

Key said someone once told him the system in the United States is broken and needs to be fixed. He said he challenged that person and said ‘the system isn’t broken, the system in America does what it was designed to do. That is to give benefit and privilege to some at the expense of others.’

“We don’t need to fix the system,” said Key. “We need to dismantle, destroy and deconstruct the system and then correctly construct and erect a new system that is based in health equity and justice for all people if really want to build a culture of health.”

Also speaking at the event was Claudia Perkins-Milton, a Black Trade Unionist and candidate for the 34th District State House of Representatives.

Perkins-Milton said she witnessed firsthand the systemic racism working in the shops at General Motors. It was nothing to go into a shop in 1976, open a locker belonging to a Black shopworker and have a hangman’s noose fall out.

But now, she said, she thinks things in the U.S. might be changing.

“I think the George Floyd situation ignited something. We are all dealing with racism. Not all whites are bad, not all blacks are good,” said Perkins-Milton. “When I think about Juneteenth, I think about hope, I think about love, I think about camaraderie. I imagine our ancestors fought, bled and died to see the future generations be better, even though they knew they wouldn’t live to see it.

She urged everyone to do their part by registering to vote and exercising that right come election time.

Joe Massey, who serves as a Grand Blanc Township Trustee, said he remembers as a young man, when Robert Kennedy was running for president, he said “Some men see things as they are, and ask why. I dream things that never were and ask why not.”

Massey, a retired NASA engineer, said that’s the way he believes in leadership.

“I don’t look at what you’re doing, what you’ve failed at,” he said. “I’m looking at what I can do to improve the system.”