Junior Generals, Jets duke it out at Iceland 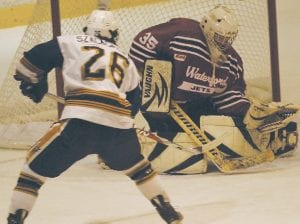 FLINT — The Junior Generals resume their season this weekend, still smarting from a wild and crazy, 6-4 loss to the Metro Jets on Dec. 21.

Flint fought back from a 3-0 deficit to make a game of it in a fight-filled second period at Iceland Arena. The teams collected two fighting major penalties and two fighting game ejections apiece in the period, most of them with 1:37 left. Flint’s Jon Toth and Brooks Roth, along with Metro’s Morgan James and Jacob Schlacht, all earned five-minute majors, with Roth and Schlacht also drawing ejections.

Prior to that, Metro’s Bryan Marks was tossed in the first period for abuse of officials after he, inadvertently or not, knocked an official down in a collision at center ice. Flint’s Tyler Kennedy and Mason Bohlinger received 10-minute misconduct penalties in the second period, Kennedy for grabbing the face mask.

In all, Flint collected 59 penalty minutes on 12 infractions, while Metro drew 48 minutes on 11 penalties, most of it in the first two periods.

In between whistles, Flint rallied in the second period on goals by Nicholas Szalacinski and Swartz Creek’s Andrew Lay to pull within 3- 2. Szalacinski’s goal came officially at 12:13 on assists by Warren Carter and Caleb O’Brien but was actually scored a few seconds earlier. Officials initially ignored the red lamp and let play continue until a stop in the action allowed them to confer with the goal judge and rule it a score.

Lay’s goal at 17:56 was a bang-bang play assisted by Stephen Hibbard and Conner Enciso, with the last pass a rocket from the left boards that Lay redirected from point-blank range at the right post.

But the Jets scored three goals in the first 2:11 of the third period to pull away to a 6-2 lead. Flint fought back on a Nathan Scurfield goal assisted by Hibbard and Lay at 6:23. Lay scored his second goal on passes from Hibbard and Enciso at 12:41, but the Generals could get no closer. Flint outshot the Jets 50-30.

The Generals, 12-16-0-1, will play in Cleveland this Saturday and Sunday. Their next home games will be Jan. 22-23 against Queen City.