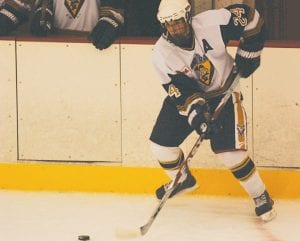 DAVENPORT, Iowa
— Andrew Lay assisted on two goals and the Flint Junior Generals broke through for their first victory of the season in dramatic fashion last Sunday.

The Generals scored the last four goals of the game to beat Quad City, 4- 3, in a Central States Hockey League game at The River’s Edge. Flint had lost its first six games, including a 4-3 defeat to Quad City on Saturday night.

Charles Chamberlain’s second goal of the game was the winner at 12:19 of the third period and came on assists from Conner Enciso and Shane Johnston.

Enciso had tied it at 3-3 on a goal 15 seconds into the third period, with Chamberlain and Swartz Creek’s Lay assisting. Lay also assisted on Chamberlain’s first goal midway through the second period that made it 3-2.

The Generals were down, 3-0, early in the second period before Johnston started the comeback with a power-play goal on an assist from Enciso at 7:09 of the second. Flint was outshot 30-16 the first two periods, but outshot the Junior Flames, 22-12, in the third.

Chamberlain earned the first star of the game, and Flint goalie Dominic Orlando got the third star after making 39 saves.

The Generals also rallied in Saturday night’s game, erasing a 3-1 deficit and tying it 3-3 on Lay’s goal with two minutes left in the second period. But Quad City won it on a power-play goal midway through the third.

Lay also assisted on Flint’s first goal, a power-play score by Chamberlain at 4:01 of the second period. Mason Bohlinger then pulled the Generals within 3-2 with another power-play goal assisted by Enciso at 17:42. Lay tied it 18 seconds later on another Enciso assist.

Lay is tied with Chamberlain for the team lead in points with nine each, and the two are tied for fifth in the league scoring race. Lay has four goals and five assists in seven games, while Chamberlain leads the team with six goals including three power-play goals.

Joe McAuliffe of Goodrich has a goal and an assist in seven games.

Flint climbed out of the cellar in the 12-team CSHL and left Battle Creek as the only winless team. Quad City was playing its first two games of the season.

The Generals are back on the road but close to home this weekend, with a 7:50 p.m. Saturday game against the Metro Jets at Lakeland Arena in Waterford.