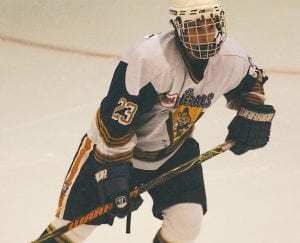 Joe McAuliffe and the Jr. Generals have the week off for the Thanksgiving holiday.

GAINES
— The Flint Junior Generals saw their four-game winning streak snapped last weekend with a pair off losses to the Peoria Mustangs, 3-1, on Saturday and 5-1 Sunday, at Iceland Arena.

The Generals had scored 30 goals during their longest win streak of the season, but were stymied by the Mustangs, despite getting 54 shots against goalie Samuel Hingtgen on Saturday.

Conner Enciso scored for Flint in Saturday’s game, on assists by Mason Bohlinger and Nicholas Szalacinski at 11:12 of the second period. But the Generals trailed 2-0 at that point and never saw a lead, despite outshooting Peoria, 20-10 in the third period and 54-38 for the game.

The Generals led Sunday’s game, 1-0, after Warren Carter scored just 3:53 into the contest on assists by Charles Chamberlain and Tyler Kennedy. But Peoria tied it at the 14- minute mark and took the lead 58 seconds later. The Mustangs then added three goals in the second period.

The Generals will take this weekend off after playing three games in five days this past week. They hosted the Metro Jets on Wednesday night.

Flint stood 8-13-1 going into Wednesday’s game. Swartz Creek’s Andrew Lay led the team in scoring and stood fourth in the league with 31 points on 14 goals and 17 assists in 20 games. Chad Tickner of Toledo led the NA3HL with 40 points.