JV could use help 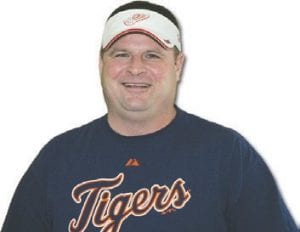 The Detroit Tigers come out and win their first four games of the season and finally lost on Sunday to Baltimore. It was an outstanding Justin Verlander gem with absolutely zero run support. Verlander has pitched two good games and has zero victories to show for it. I hope this isn’t another year where the Tigers’ offense gives Verlander no support. Verlander was outstanding in spring training and has been up north so far also. The offense has been fine, too. How about Torii Hunter out of the gate with three home runs? I love to see Hunter off to a great start. What’s not off to a great start is the atrocious bullpen. Do we, as Tiger fans, have to suffer through another year of bullpen blow ups? I mean, Phil Coke does not produce the Fat Guy with a Coke and a Smile! He should not even be on the roster. I don’t give a darn if he is left handed or not. He can’t get anybody out!

Joe Nathan, what the heck? They paid you good money to close out games and save Tigers fans’ finger nails in the ninth inning! I think you look scared out there on the mound to be totally honest. I don’t see any velocity on your fastball. Where is it? I mean you keep throwing up pitches to hit like that and there will be fights at the bat rack to get into the game to hit. I realize it’s early and the panic button should not be hit yet. However, after the last three years of bullpen implosion, Tigers fans are growing impatient and tired of it. I know I am. This team has World Series potential and most of the pieces to win it all. The bullpen is the huge question mark once again. I don’t know if I can take another summer of shaky late-inning performances. I will say I liked Brad Ausmus pulling Coke in the ninth inning before the game went from a win to a loss. No messing around; I liked that. One more thing: someone tell Alex Avilia the regular season has started! He has a sweet .083 batting average already!

The Masters has arrived. The Masters will miss Tiger Woods as a participant, as he is out with back surgery. Does Tiger Woods not playing make a difference whether you will watch or not? I have to believe it does effect some golf fans and whether or not they will watch the Masters. I will miss seeing Tiger, but I am still watching, regardless. The field is still loaded with awesome talented golfers. The Masters is the golf tournament I love to watch above all others. The holes on the course are gorgeous, the gallery is awesome and it’s just an absolutely breathtaking course, in my opinion. The one thing missing this year is the Eisenhower Tree on the 17th fairway. It was lost during the February ice storm. It’s sad to see the famous tree have to be removed.

Who will win this week? I am going to go with Jason Day or Matt Kuchar. My dark horse is the young Jordan Spieth.

The Detroit Red Wings are making the push for its 23rd straight playoff trip. The young Grand Rapids … oops … I mean Red Wings are playing tremendous hockey down the stretch. This Nyquist kid is a superstar in the making. He has put the team on his back the last two months of the season. I really believe nobody in that locker room wants to a member on the Red Wings team that had the playoff streak stopped. There are only four games left and they have a one-point lead over Columbus and a four-point lead over the New Jersey Devils.

The schedule is tough, but I feel Detroit will find a way to make it 23 years of playoffs and the streak lives. Jimmy Howard has stepped up his game along with the rest of the hockey club. If the Red Wings do make it, they will more than likely play the Pittsburgh Penguins or the Boston Bruins in the first round. Detroit wants to avoid the Bruins if it can. Mike Babcock has done a fabulous job with all the injuries to this hockey club. Come on, Hockeytown. I need April playoff hockey in the “D”! Let’s Go Red Wings!

The U-Conn Huskies are the 2013-14 college basketball champs. The Huskies took down the five freshmen from Kentucky in a thrilling game. The No. 8 seeded Wildcats just did not have enough to get past the pesky UConn Huskies. Shabazz Napier was named the Final Four Outstanding Player. Napier put the UConn team on his back and took them to the championship. Napier won two National Championships at UConn. How about that for a college career? I, by the way, missed my pick of a Florida and Wisconsin final. Shocker there, huh? No, it’s not. I think almost everyone saw Florida cutting down the nets and winning it all. thefatguy@mihomepaper.com.