“Song stylist” talks about his lifelong love affair with music 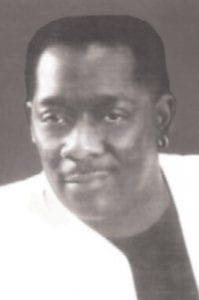 That’s because Jymi Dill, of Flint, is a lifelong lover of music. He’s been impressing audiences with his voice, performances skills and vast knowledge of musical history for more than 20 years.

In Lapeer County he can be found performing at Lenny Miller’s on a regular basis and thanks to a gig performing a tribute act as “Nat King Cole” with Detroit-based company Salute to the Superstars, Dill has also frequented places like the American Legion in Lapeer.

Dill’s love of music began before he could talk. He said his mom, Annie Mae, used to calm him as a baby by playing records or singing to him.

“My mother knew everything written,” said Dill. “I’m exactly like her.”

His extensive knowledge comes from many avenues. One being family. Along with his mother’s love of music, when Dill was young his mother’s cousin moved into his family’s home bringing all of his jazz record collection with him. Dill was exposed to music beyond his years. Being a self-described “old soul” the music took hold of him.

At age 15, after seeing a play in downtown Detroit, Dill said he decided he wanted to be an actor.

He began training for the stage in his hometown of Flint. It was when he sang on stage, however, that Dill really found his calling. Still, he didn’t want to leave acting behind.

That decision came when Dill was 19. A bus boy at the University Club in Flint, Dill was offered the opportunity to sing during an employee party. Taking the stage with the well-known Sherman Mitchell Quartette, Dill realized he’d found his calling.

He began performing around the United States at local clubs, private parties, events and more.

His singing even took him to Las Vegas where he lived and worked during his late 20s and early 30s.

Dill eventually returned home to care for his mother and began training with Harold McKinny’s jazz workshop in Detroit. While there he had the opportunity to perform with experienced jazz masters like McKinney and Teddy Harris.

It was during this time that Dill also made it a point to meet some of the stars who influenced him, one of the most important being Nancy Wilson.

“She has been my greatest inspiration,” said Dill.

Throughout the years Dill said he never had the desire to pursue a professional recording contract, saying he saw what that life was like through Starr. Instead, Dill opted to stay close to home.

Today Dill, who calls himself a “song-stylist” performs many of the jazz tunes he grew up with. But he doesn’t stop there. He also performs R&B, pop, Broadway, country, vocal standards and more. He can be found at wellknown clubs like Baker’s Keyboard in Detroit, restaurants like Lenny Miller’s and the Willow Tree restaurant in West Branch. He also does presentations in schools across the country and most recently began performing at senior centers.

“It’s the music they know,” said Dill, who is currently recording his first CD.

After more than 20 years of performing full time Dill says he has no plans to stop any time soon.

“It’s the passion of continuing a form of music that is no longer in the main stream,” he said of what keeps him going. “I’m one of the people who are continuing a tradition … For me the music is the soundtrack to the human existence.”