Car thief caught after pursuit on I-69 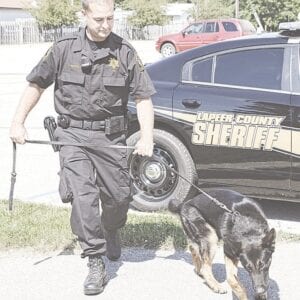 Axel and Lapeer County Sheriff’s Office Deputy Frank Ruzicka were in the right place at the right time early Sunday morning to track and help apprehend a Sterling Heights man who stole a vehicle in Davison.

LAPEER TWP. — Axel, the Lapeer County Sheriff Office’s K-9 unit teamed with handler Deputy Frank Ruzicka, helped locate and detain a Sterling Heights man who reportedly stole a vehicle in Davison and was chased by Genesee County officers on I-69 into Lapeer County in the early hours of Sunday, April 25.

The K-9 team was called into action around 1:20 a.m. after the Lapeer County 911 Central Dispatch was contacted by Genesee County 911 in Flint. Genesee Dispatch personnel indicated Davison Police Dept. officers were in pursuit of a 2018 Dodge Charger that had just been stolen in their jurisdiction.

Genesee County discontinued the pursuit near Elba Road. Lapeer County Sheriff’s deputies located the stolen vehicle traveling at a high rate of speed near South Lapeer Road (M-24) where they attempted to stop the vehicle.

Det./Sgt. Jason Parks said the driver of the Charger evaded the traffic stop and continued eastbound at speeds more than 100 mph. At that time, alerted of a pursuit on I-69, officers from Metamora Twp. Police, Dryden Township Police, Michigan State Police and Imlay City Police Dept. joined in to provide assistance to locate and stop the driver of the Charger.

Parks said at 1:27 a.m. and approximately five miles east of M-24, Sgt. Don Brady of the Sheriff’s Office located the stolen vehicle stopped along I-69 east of Wilder Road. The vehicle was not occupied.

Deputy Ruzicka heard the dispatch traffic when he was in the area of I-69 and Elba Road. The eastbound Charger had already passed, but Ruzicka and Axel joined in the pursuit and was on scene with Brady and the abandoned vehicle in just minutes.

Ruzicka and Axel were successful to quickly establish a track. The K-9 team traveled west through woods, a swamp and eventually to where the 25-year-old suspect was located hiding behind a tree near Wilder Road. “The suspect appeared to zig-zag a few times and crossed Wilder Road a couple times,” said Parks. “The suspect discarded several articles of his clothing as he ran.”

Parks said officers and law enforcement agencies involved in the pursuit were mindful of the speed involved in the chase, and monitored traffic volume and the number of people on the road to assess whether to continue the pursuit.

“Fortunately, at that early hour there was hardly anyone out there on the road. It all worked out well,” said Parks. “A stolen vehicle was recovered, and the suspect was taken into custody without injury to anyone. Having the K-9 out there was invaluable to make the arrest.”

With numerous officers from multiple agencies involved, they were able to position themselves along eastbound I-69 to make a stop. Metamora, Dryden and Imlay City officers along with county and state cars were staggered in positions from west to east.

Imlay City officers, said Parks, were prepared to toss down spike strips across the roadway to deflate tires on the speeding stolen vehicle. “St. Clair County had also been alerted in case the car made it that far,” said Parks.

Parks continued, “We’re seeing a healthy and successful record of the unit (K-9) to get a track. Recently Deputy Ruzicka and Axel tracked and recently helped apprehend several juveniles in after they broke into the former Whistle Stop store in North Branch and ran into the woods.”

Axel is a German shepherd trained from birth in the Netherlands to track people and locate drugs. He’s been working for the Sheriff’s Office since 2017 when he started with the agency. The dog was 18 months old. He’s now five.

Davison Police responded to the scene and took possession of the stolen vehicle and custody of the arrested suspect. Criminal charges will be presented and are expected in Genesee County.