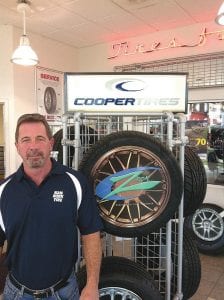 FLINT — Tim Roche, president of Kan Rock Tire, has become a stockholder in Del-Nat Tire, a leading independent tire distributor that operates as a cooperative.

Founded in Memphis, Tennessee, in 1989, Del- Nat Tire has a network of 78 tire dealers and distributors who are stockholders in the company.

“The Del-Nat program fits well within our needs because we are in the midst of diversifying to include a wholesale division,” said Roche. “This gives us something more we can use in that venture and exclusivity because we’re now able to carry the Delta brand. We’re proud to be on board.”

Roche’s father started Kan Rock Tire as a chain of gas stations in 1950.

In 1965, the company became a tire dealership, then grew to offer complete auto repair services in 2008.

The company has averaged 10 percent growth per year since Roche began working at the company in 1979. — G.G.