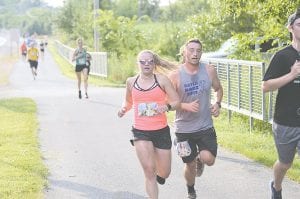 Kaitlin O’Mara, now 30, runs the course wearing bib No. 1 Saturday as she always does in honor of her twin sister, Kayla during the 14th running of the memorial races. Matt VanSumeren, bib 341, runs next to O’Mara. Photo via kaylarun

GOODRICH — A beautiful Saturday morning greeted runners and walkers from all over the state as they took part in the 14th annual Kayla Run, a memorial race in honor of Kayla O’Mara, a former Goodrich cross country standout who was killed in a car crash at the age of 16.

The winner of the male 30-34 division was Steven Rose in 18:29.2. Complete race results are available at ­kaylarun.com