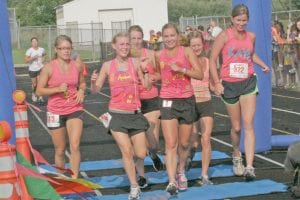 GOODRICH – Since the tragic passing of Goodrich cross country and track star Kayla O’Mara in 2006, a race in her memory has been organized annually at Goodrich High School. O’Mara passed in a January evening car accident in which her twin sister Kaitlin and their friend Danielle Bila were heading to a coffee shop to study. Her.memory lives on through the race. The yearly festivities will take place on Saturday, Aug. 6.

The course of the race will consist of a wide variety when it comes to the terrain. The course will include paved and dirt roads, as well as rolling hills and will conclude on the Goodrich High track, which will also include a 5k course.

There will also be a half-mile fun run/ walk, which is half of a mile of the 5k course, including on the track. Finishers will be honored with an award. There is also a child fun run/walk, which adults are welcome to participate with their child.

All registered participants will receive an award, as well as a race T-shirt.

On race day, packet pick-up and late registration will begin at 7 a.m. and conclude at 8 a.m. in the Goodrich High auditorium. The 5k run/walk takes place at 8 a.m. in the front of the high school, followed by a post-race part at 8:15 a.m. near the track.

The party will include pizza, fruit, water, Gatorade and giveaways. At 9 a.m., the half-mile fun run/walk is slated to begin on the bike path in front of the high school. The awards ceremony will follow at 9:15 a.m. at the post-race party tent and will be comprised of all of the age group award winners for the 5k run and walk.

This year, the organizers have decided to focus their attention on the 5k race and will not be hosting the 10k race as in past years.

The annual award of the Kayla O’Mara Memorial Scholarship will also be announced. Nine students were awarded scholarships in 2015.

To register, look up the race records or results, or learn more about Kayla, the race, scholarship or registration, visit www.kaylarun.com.