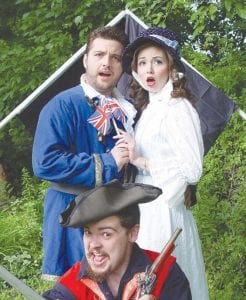 From left, Zac Wieber as Frederick, Caroline Marie Collins as Mabel and Mike Davis as the Pirate King.

FLINT — Flint’s Kearsley Park Players take to the stage again in the Gilbert & Sullivan musical classic “Pirates of Penzance”. This rollicking comedy features pirates, beautiful maidens, comic policemen, a star-crossed love affair and some of the best music in the history of musical theater. Opening at Crossroads Village’s historic opera house, shows will run August 1, Saturday August 2 and Sunday, Aug. 3 at 7:00 pm. The show will then move to Kearsely Park for performances, Aug. 8-9 at 7 p.m. with a final performance Aug. 10 at 3 p.m. (the only matinee). Tickets are $5. To make reservations for Crossroads Village opera house, call 810-736-7100 (ext. 6) and for Kearsley Park call 810- 845-4050.

This performance is part of “2014 Theatre in OUR Parks”, a collaboration between the City of Flint Parks and Recreation Department and Genesee County Parks Commission through a generous grant from the Ruth Mott Foundation. — G.G.