Keeping Cool (and Dry) Under Pressure 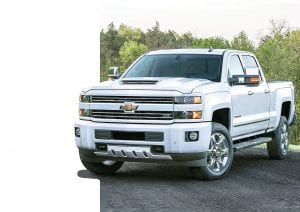 New for 2017, Chevrolet Silverado HD trucks feature a patented air intake system that drives cool, dry air into the engine for sustained performance and cooler engine temperatures during difficult driving conditions. The intake system underwent extensive testing based on the most challenging real-world driving conditions to ensure capable performance no matter the weather.

Marked by a dramatic hood scoop, the all-new air intake system provides 60 percent of the air to the Duramax diesel engine from an inlet at the front of the hood. The air provided to the engine is very close to the outside ambient temperature and much cooler than the air under the hood.

Cooler air helps the engine run better under load, especially in conditions where engine and transmission temperatures can rise quickly. Running cooler allows the Duramax diesel to maintain full power and vehicle speed for capable trailering in even the toughest conditions.

There’s also a ram-air effect from the incoming air at highway speed that helps pack more air into the engine. The air filter housing also draws 40 percent additional air from a dry location in one of the front fenders. It blends with the cooler air from the hood inlet before funneling into the Duramax’s combustion chambers. This assures the engine can breathe even if the hood is completely blocked. 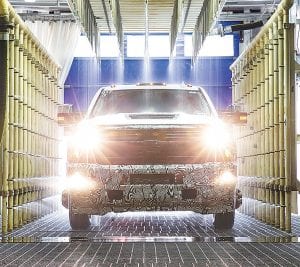 Engineering of the all-new air intake system on the 2017 Chevrolet Silverado HD was rooted in real-world driving conditions of every degree – from misty rains to monsoon-level downpours. The patented intake system drives cool, dry air into the engine for sustained performance and cooler temperatures during difficult driving conditions.

“The 2017 Silverado HD was engineered to provide maximum utility for our customers in even the most extreme situations,” said Eric Stanczak, chief engineer, Silverado HD. “While developing this allnew induction system, we considered our customers towing a maximum-weight trailer through the Eisenhower Tunnel on a hot, rainy summer day.” At more than 11,000 feet above sea level, the Eisenhower Tunnel, is the highest vehicle tunnel in the world and one of the highest elevations for any roadway in North America.

Maximized engine performance requires more than cool air; the air must also be clean and dry. Accordingly, the functional hood scoop includes a unique air/water separator to ensure only combustionenhancing dry air is drawn into the engine. The air charge enters an expansion chamber containing a sharp, 180-degree turn on its way to the air filter housing. That creates a velocity change that causes humidity or mist to form larger, heavier droplets that are flung centrifugally against the outside wall of the housing. The collected water drains through a valve, while the air charge continues on to the filter housing and into the engine. 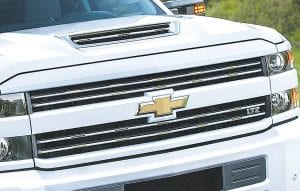 Testing the effectiveness of the system was rooted in real-world driving conditions of every degree — from misty rains to monsoon-level downpours; from powdery snow to wind-driven ice pellets; from desert dust to arctic cold.

Surprisingly, torrential downpours do not necessarily pose the biggest challenge, according to Kevin Dunn, global vehicle performance for splash engineering: “Big, heavy raindrops from a thunderstorm are relatively easy to eliminate from air. The more challenging issue comes from the mist-like spray generated by semi trucks on wet highways. Those very fine water droplets prove more challenging to separate from the air. The air intake is an elegant solution that works well with water droplets of all sizes. For customers, the results delivers maximum engine performance and even greater towing confidence.”