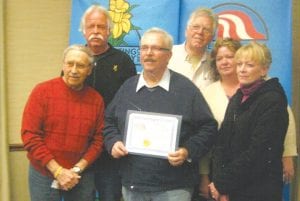 KEEPING IT BEAUTIFUL – The township’s Park and Recreation Advisory Board received an honorable mention at the 2013 Keep Genesee County Beautiful Awards on March 9 at the University of Michigan- Flint. The group was recognized for planting flowers along the new Genesee Valley recreational trail. Jim McClung, a committee member, described the effort as hard work on a hot day digging into a former railroad bed that was hard as rock. The group is hoping to get another min-grant this year to update landscaping at the township hall, he said. Beautification awards are given each year to recognize projects and people making a substantial contribution through clean up and beautification activities throughout Genesee County.