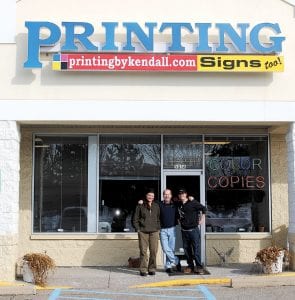 FLINT TWP. — After a fire destroyed his previous building in early November, Scot K. Brown, owner of Kendall Printing, relocated his business to 5038 Corunna Rd., in the VG’s plaza between Subway and Hong Kong Buffet.

Brown, a Fenton resident, moved Kendall Printing to its current location after Thanksgiving after spending 18 years in the previous facility. A veteran printer, Brown has been in the business since 1981 when he worked for Adam Kovall of Schneider Printing. At Schneider Printing, Brown said the company’s previous owner, Lee Marr, taught him all about printing. From those beginnings, Brown worked at various printing companies, along with a year-and-a-half at Bank of America, before opening his own printing facility in 1989.

“I worked out of my house for six months, then bought out the Copy Depot,” he said. “Then I was down at the other location for 18 years.”

With the relocation, Brown said most of Kendall Printing’s business is word-of-mouth from customers.

“The best compliment is a referral,” Brown said. “When someone says something nice, that is the biggest compliment.”

Brown said he also likes his new location. “The new location gives us more visibility,” he said. “The car count is higher and people drive by slower.” He also said his new neighbors are all nice.

Kendall Printing offers a wide variety of services, including layout and design, printing, mailing services, bindery services, signs and magnetics. The company also does custom design work, and prides itself on its innovation and customer service said Brown.

“We like to compete against the big box store because their prices tend to be on the high side. We don’t have a price list. We’re a little more customer service oriented,” he said. “We customize our prices based on customer needs.”

For a traditional item such as business cards, Brown said the turnaround time is approximately one week. Normally, graphic design costs are extra for printing services.

“There is usually one day for design and then a few days for production,” he said. “Our design work is a cut above, and our personalized service is key. Our design work can compete with ad agencies.”

Kendall Printing does offer a discount for non-profit organizations, such as churches and schools. “We try to be competitive for them,” Brown said.

Along with Brown, the company has a full-time Graphic Designer, Dee Thomas-Quillen, and Journeyman Pressman Sean O’Reilly. Thomas- Quillen, a Burton resident who has been a graphic designer for 27 years, has been with Brown for 10 years. When it comes to the graphic design aspect, Thomas-Quillen said sometimes the customers bring in examples of what they want and other times, she comes up with a design for them.

Fenton resident O’Reilly, who operates the various printing presses and machines, has been with Brown for seven years. Brown also employs a part-time bookkeeper.

While Kendall Printing does much of the work in-house, Brown said some work is done at outside companies to “keep prices competitive.”

To celebrate its relocation, Kendall Printing is offering a special on business and appointment cards. The cards, which are two-sided, full color and include the design work, are $55 for 250, $65 for 500 and $80 for 1,000.