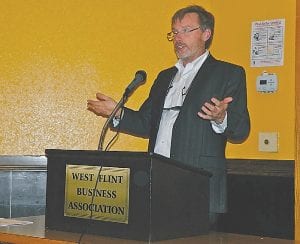 FLINT TWP. — Probably few people envision being able to safely walk down blighted University Avenue in Flint from the Kettering University campus to the University of Michigan — Flint campus on Saginaw Street.

But that is the vision of Robert McMahan, president of Kettering University, who has been taking steps to make that walk a reality since arriving on campus in August 2011.

In his presentation last week to the West Flint Business Association, McMahan described Kettering’s community stabilization efforts that include buying blighted property, booting out the corner liquor store and installing public cameras on streets throughout the area..

Through relationships with the Genesee County Landbank and the Mott Foundation, Kettering is on a mission to reclaim the blighted corridor, formerly Third Avenue, that is lined with blighted homes, vacant lots and crumbling businesses.

“Our internal mantra with (Kettering) staff is we have got to make University Avenue walkable,” McMahan said. “Our people have to be able to leave the university and walk to Saginaw Street. All we do has to be oriented to making the corridor walkable.”

Kettering has now acquired almost 100 properties in the area around the university, McMahan said, drawing applause. Structures are torn down and the vacant lot is offered to local residents to plant gardens.

With a Mott Foundation grant and fundraising, Kettering also is installing a state-of-the-art street security system that will place 70 HD street cameras in the area. Campus coverage is completed and for the first time so are views along major thoroughfares – Dupont, Chevrolet and University, he said. Other cameras will be installed the nearby Mott Park neighborhood.

The intelligent security system can be programmed to record suspicious activity such as a person walking down University Avenue at 3 a.m. or a vehicle entering the parking lot at Durant-Tuuri-Mott Elementary School, McMahan said. Live images from the camera, including license plate numbers, can be recorded and shared with police via equipment in patrol cars.

McMahan also noted that a corner liquor store across the street from Kettering has been replaced by an Einstein Bros. Bagels franchise that serves the campus and draws 70 percent of its business from the surrounding community.

McMahan said he draws ideas from his past experiences which includes being the Senior Advisor to the Governor of North Carolina for Science and Technology and later the founding dean of Kimmel School of Construction Management, Engineering and Technology at Western Carolina University with a focus on regional economic engagement.

While working for the governor of North Carolina he learned the ropes of rebuilding a community from a city with circumstances similar to Flint. Kannopolis, NC, the birthplace of Cannon Mills textile company, was a oneindustry town for more than 100 years. The plant closing led to the largest massive layoff in NC history.

Today, about 12 years later, the former site of the mills is home to a collaborative university research campus made possible by private and public partnership revitalization investments of about $3 billion, McMahan said.

Having three universities puts Flint ahead of the revitalization curve in McMahan’s view.

“This town has an amazing educational infrastructure already in place,’’ he said.

Another hopeful sign of recovery is the number of young professionals that McMahan said he sees buying homes in Genesee County, even if they work in Detroit or vicinity. That’s an investment in Flint’s future. One hundred years ago, Flint was the Silicon Valley of the United States with more than 130 car companies operating, he said. The auto industry was built by young entrepreneurs who invested in Flint.

“This community has all the pieces and parts it needs to emergeinaaverysuccessful way,’’ McMahan said.

He predicted that 20 years from now, “Flint is going to be an amazing place.”