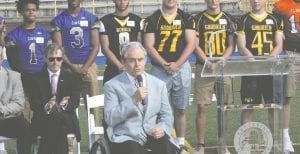 FLINT – Flint’s Atwood Stadium has played host to many athletic events over the years, and starting this fall, a few area schools will make their debut at the Kettering University-owned facility. On Atwood’s 50-yard line on Tuesday morning, a press conference was held to announce the inaugural Vehicle City Gridiron Classic, set for Thursday, Aug. 24.

It will consist of a triple-header on the first night of high school football season and will include schools that don’t typically get the chance to play at Atwood. The 88-year-old stadium is the home field of the new Flint High, as well as Flint Powers Catholic, for football, soccer and lacrosse.

The press conference had several of the coaches, athletic directors, and even football players from all of the participating schools. Media from all across the Flint area was in attendance at the event as details were announced by Judge Duncan Beagle, Flint & Genesee Chamber of Commerce CEO Tim Herman and Kettering University president Bob McMahan.

“We are really excited to partner with the Chamber (of Commerce), the community and the six local schools to bring what will become a major yearly tradition to Kettering’s Atwood Stadium,” said McMahan. “This is exactly the kind of major event we envisioned when we took over Atwood Stadium in 2013, and we completed this renovation in a couple of years.

“We are so delighted, because since reopening in 2015, Atwood has once again become a hub of activity in our community. The stadium has hosted collegiate intramural, high school and youth sporting events as well as social events coordinated by various organizations. In total, these activities have brought nearly 40,000 visitors into the heart of Flint.”

At 1 p.m., Goodrich will take on Bendle as Martians’ coach Tom Alward goes up against his alma mater. At 4 p.m. it will be a Flint Metro League battle between Flushing and Linden, and at 7 p.m. is the old Big Nine rivalry, and soon to be Saginaw Valley League rivalry, between Carman-Ainsworth and Grand Blanc. Grand Blanc becomes a member of the Valley next season. This is an event that will be planned every year from here on out and may eventually add a second day to the festivities in future seasons.

Similar events are held every year at the University of Michigan, Wayne State University and Grand Rapids’ Houseman Field.

The stadium underwent major renovations in the summer of 2015. After years of not having the resources to maintain the facility, the city of Flint and the Atwood Stadium Authority handed Atwood over to Kettering. The stadium had fallen into disrepair and local high schools refused to play there in 2014 due to the age of the outdated AstroTurf surface.

That’s when Kettering decided to step up and vowed to make Atwood a viable part of the community again. Aside from the new turf, Kettering has redone the bathrooms, concession stand, locker rooms, brick and masonry work throughout the stadium, removed dead trees, put up new, more vibrant fencing, installed new goal posts and made it possible for soccer and lacrosse to be played there, amongst many other things.

“As you look around, and some of you may remember what the stadium once looked like, with the help of the Mott Foundation, what Kettering University has done around here is just magnificent,” said Beagle. “Not only the turf, but the surrounding grounds. It’s just amazing. A lot of that credit goes to Kettering officials.”