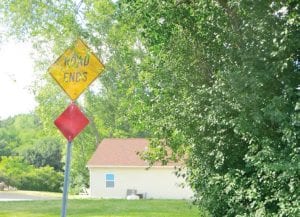 The dead-end of Ketzler Drive abuts property owned by North Baptist Church. Site plans for an addition to the church and other lot improvements were approved last year.

FLINT TWP. — Ketzler Drive, north of Lennon Road, is a quiet dead-end street with just a few houses and very little traffic. Residents want to keep it that way.

Already, they have submitted a petition to the township board asking to prevent a neighboring church from connecting to their street as a second access road.

North Baptist Church, 4004 Lennon Road sits far back from the road on a deep lot that borders homes on Ketzler Drive. The church is accessible only via a long driveway from Lennon Road.

As part of an expansion plan begun last year, the church wants to extend the southwest portion of it parking lot to connect to Ketzler Drive, as a second access road.

According to the two-page petition, submitted by resident Brian Curtis on behalf of Ketzler ‘s 12 households, one resident was informed by the pastor of the church that “they will be legally pursuing” access to Ketzler Drive to relieve congestion when entering and leaving the church. Ketzler residents’ petition submitted ten reasons why they think extending the road would be detrimental to their neighborhood, including: – Tenfold increase in daily traffic. An estimated 100-150 cars enter and exit during Sunday church services and there are many church activities throughout the week. Estimates are based on 116 existing parking spaces at the church plus 40-50 being added.

-Street is too narrow. Ketzler Drive is 20-feet wide with no curbs or sidewalks Nearby residential streets, including Ketzler Drive south of Lennon Road, are 10.5 feet wider. It does not seem that the dead-end portion of Ketzler Drive can maintain heavy two-way traffic. Residents already must drive slowly to safely pass in opposite directions.

– Length of Ketzler Drive. Based on average car lengths of 16 feet, it would only take about 52 cars to create bumper to bumper traffic the entire length of the street. That could make it difficult or impossible for residents to reach their homes during peak church traffic times.

-Most businesses on Lennon Road between Dutcher and Miller Roads have only one exit. -Road condition. Ketzler Drive has not been repaved since the 1950s and is already deteriorating, which would be accelerated by additional traffic.

– Pedestrian safety. Ketzler has no curbs or sidewalks so residents must enter the street to retrieve their mail or walk to a neighboring house. Several small children and a hearing-impaired child also live on the street.

Residents asked that a qualified road engineer analyze the road and provide them with proof that it can safely sustain heavier traffic long-term.

“Ketzler Drive has been a cul de sac since its inception over 60 years ago and several of the residents have lived on Ketzler Drive since that time,” the petition concluded. “We, the undersigned have enjoyed living in Flint Township and the quietness that living on a dead end street has provided the neighborhood. We are only 12 residents in Flint Township, but our longevity and loyalty to living in this community is not widely seen in other communities today.

“We have no desire to stop the North Baptist Church from growing its congregation and we welcome that growth but we, the undersigned, do not feel having access to Ketzler Drive will benefit the church or the residents.” Curtis said residents wanted their petition entered into records of the township board meeting.

Responding to Curtis, Township Supervisor Karyn Miller said the street connection was not part of the approved site plan for the church’s expansion project. She also said that as far as she knows no street extension request has been submitted to the Genesee County Road Commission which would be the next step.

Meantime, construction equipment remains on site at the church which is finishing a building addition and other lot improvements.