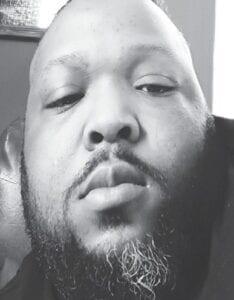 Kevin was born in Detroit, Michigan on December 6, 1985, the son of Mr. Kevin Sanders and Ms. Marsha JoAnne Edwards. Raised and educated in Genesee County, Kevin graduated from Flint Central High School with the Class of 2004. The love for his country encouraged Kevin to enlist himself into the United States Army, leaving just 2 days after his last day of high school. From June 16, 2004, Kevin proudly served overseas earning multiple medals including the National Defense Service Medal, Global War on Terrorism Expeditionary Medal, Global War on Terrorism Service Medal, Korean Defense Service Medal, Army Service Ribbon, and Overseas Service Ribbon 2nd award. Returning to civilian life after his honorable discharge on November 22, 2008. Kevin went on to continue his studies, earning his Associate’s Degree from Mott Community College. Kevin then began his civilian career with Tribar Technologies. Gaming, off-roading in his Jeep, taking photos of family and nature, and collecting antique swords are just a few of the ways Kevin enjoyed spending his free time. He was an avid reader and aspiring author, with several soon-to-be-published fictional stories. Kevin really enjoyed traveling, he visited places in Europe and Asia and enjoyed camping with his family in Northern Michigan. Known for his enthusiasm for cooking, Kevin loved to grill and make delicious chicken and cabbage stew for his friends and family. In 2011, Kevin’s life changed forever when he became a father. His two sons were his pride and joy. Kevin was an amazing father, and this defined him as a young man. Kevin loved his boys with all his heart.

Friends may share a memory with the family at martinfuneralhome.com.