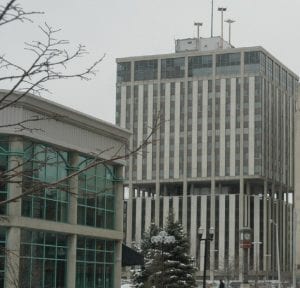 The Genesee Towers as they currently stand in downtown Flint. Uptown Reinvestment Corporation (URC) has announced contracts for the demolition of Flint’s tallest building.

FLINT — Uptown Reinvestment Corporation (URC) has announced contracts for the demolition of Flint’s tallest building Genesee Towers have been awarded and prework for demolition is progressing.

In addition, locally based sub-contractors Burnash Wrecking, Inc. and Certified Abatement Services Inc. have been selected as part of the demolition team. Burnash Wrecking is a family owned and operated company that specializes in commercial, industrial and residential demolition. Certified Abatement focuses on protocols related to asbestos, mold, and lead remediation and renovation.

Contract Drilling & Blasting, a nationally recognized implosion firm based in Jacksonville, Fla., has been hired to handle implosion engineering and blasting efforts.

“I know everyone has been waiting to hear about next steps with the Towers,” said Tim Herman, President of Uptown Reinvestment Corporation and CEO of the Flint & Genesee Chamber of Commerce. “At this point, the plan is coming together nicely. We have put together a strong demolition team to help us bring down the building in a safe and responsible manner.”

Over the next few weeks, meetings will be held with the demolition team, the City of Flint and other local stakeholders.

These meetings will focus on the development of site-specific safety and work plans, and coordination of all aspects of the project leading up to the implosion. “Everything is contingent upon these meetings,” said Lurvey. “If the planning goes smoothly, then we anticipate the implosion will occur in mid December — most likely on a Sunday afternoon.”

Flint and Genesee County citizens and others across the nation will have an opportunity to watch the demolition live, or on the news or the Internet.

The implosion of Genesee Towers marks the first time in a decade that a building has been demolished by implosion in Genesee County. — G.G.