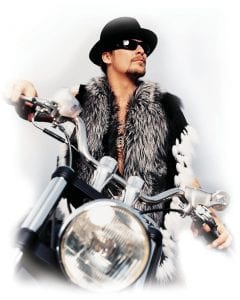 Kid Rock will be at The Machine Shop in Flint on April 16 for a private show.

FLINT — Kid Rock will take to the stage of The Machine Shop, 3539 S. Dort Hwy., on April 16 for a private show. Rock, who’s real named is Bob Ritchie, will perform as part of The Jim Beam Live Music Series — 10 live concerts by 10 different artists in different cities across the nation. The announcement last week that Kid Rock would be at The Machine Shop sparked calls to local radio stations and queries on the Internet by people trying to secure tickets to the invitation-only show. Rock station Banana 101.5 was giving away tickets as part of an on-air promotion Tuesday.

Kid Rock has sold more than 25 million albums around the world, according to the Jim Beam Concert Series Website. A native of Michigan, who currently resides in Oakland County, Kid Rock achieved fame in 1998 when his album Devil Without a Cause sold 11 million copies.

The Website said further Rock’s most recent album, Born Free, shot to No. 1 on the Billboard Rock Album chart. He is currently on tour this spring and summer in support of his new album.

“I try to blaze new trails, take something from the past and incorporate it with something that’s new and fresh today, even if it’s not the easy path to take,” said Kid Rock in a statement posted to the website.

A spokesperson for Jim Beam said Kid Rock is helping launch the firstof its-kind Live Music Series, indicating he is headlining the fourth performance in the lineup, all while promoting the “Emerging Artists” of the series.

“He’s selected three of these ‘must-see’ artists, including Ty Stone, the musician signed to Kid Rock’s label, Top Dog Records,” according to the Website.

Other shows in the series will include The Cold War Kids on April 28 in Orlando, The Fray on May 27 in San Francisco and Grace Potter and The Nocturnals June 3 in Chicago.