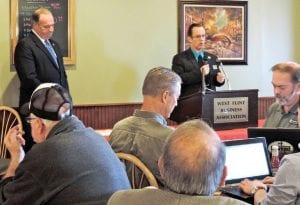 Kildee, the Democrat incumbent and Hardwick, the Republican challenger, made opening and closing remarks and responded to provided questions.

Hardwick described himself as an Information Technology professional who has owned a small computer business for 17 years. He also said he has studied theology and is active in ministry.

“As you know many people are concerned that this county is headed in the wrong direction,” he said in his opening remarks. “The way I look at it, I can sit and complain about it or I can help to change it. What I want to bring to the table is to be a true public servant bringing common sense back to Washington.”

Some of his interests are developing domestic energy, lowering the corporate tax rate, job creation and securing U.S. borders.

Kildee cited his 30-year record of public service including as Genesee County treasurer, county commissioner and founder of the Land bank.

“My work in congress speaks for itself,” he said. “My role is to be an advocate for our region … to try to grow the economy first and foremost and to get back to the kind of economic growth that provides wealth, not just for the few, but for everyone.”

He cited pathways out of poverty such as job creation, affordable day care and college education; qualify pre-K ad K-12 education, and investment in the infrastructure. He also mentioned good environmental stewardship and protecting the Great Lakes.

Asked what he sees as the biggest challenge going into 2015, Hardwick said achieving bipartisan support across the board.

“If both parties come together, we can make things happen,” he said.” I think that is the greatest challenge facing this administration for the last six years.”

Kildee agreed but added that it takes more than administration.

“What he have seen is a Congress that blocks everything this president proposes,” he said, adding that he has disagreed with President Obama on several issues. If Republican leadership and the House of Representatives would simply return to what is referred to as “regular order,” there would be more bipartisan accomplishments by a “functional majority” of Democrats and Republicans that agree on many issues, he said.

But John Boehner, Speaker of the House, has “devised a new body or the legislative branch,” he said.

“Before any legislation goes to the House of Representatives for consideration, it has to first be approved by a majority of the Republican Conference, the so-called Hastert Rule, named after former Speaker Dennis Hastert. That is undemocratic,’’ he said.

“On the few occasions when we have seen bipartisan legislation, it is because a handful of Republicans were wiling to break with their leadership and join with a majority of Democrats to do the right thing. If we can do that, we can get a lot done in this country.”

As for improving the Michigan economy and job recovery in coming years, Kildee said, “the biggest change I would make is to reinvigorate the manufacturing sector.”

Michigan needs to reclaim its manufacturing heritage supported by trade policy at the federal level that does not put American products and manufacturers at a disadvantage when competing in the global economy.

The North American Free Trade Agreement (NAFTA) is an example of “federal policy that had a devastating impact on the Michigan economy,’’ he said.

Michigan needs to diversity into other areas, he said, calling for restoration of programs such as industrial arts and skilled trades so that young people have a path out of high school leading to something better than minimum wage jobs.

As for fracking, the process of drilling and injecting fluid into the ground to extract natural gas, Hardwick said he supports it and Kildee voiced reservations.

Hardwick said his research has shown that fracking is not detrimental. The compromise is to frack in areas that won’t affect the Great Lakes, he said, adding that even the Obama administration’s reports support fracking as a safe type of extraction.

“We need to get off foreign oil dependency,” Hardwick said. “We have so many resources here.” With everything from heating homes to driving cars being oil dependent, America “needs to explore alternative energy sources.”” he said.

Kildee said the debate is over regulations requiring fracking companies to disclose the chemicals they are injecting into the ground. He advocated assessing the long-term environmental impact.

“We have the greatest fresh water source on the planet (the Great Lakes) and is it important to protect it,” he said, noting that he is working on special environmental issues to that end.