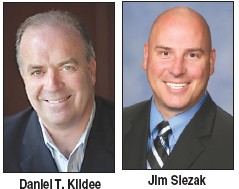 Final vote tallies were not available at publication time but with 98.6 percent of votes counted as of about 7 a.m. Wednesday, Kildee had polled 119,364 votes (65.64 percent) over his closest challenger, Republican Jim Slezak of Davison Township who polled 56,011(30.80 percent).

Kildee, a Flint Township resident, could not be reached for comment.

Slezak released a statement early Wednesday in which he conceded the race.

“Apparently it’s not bad enough for the people of the district yet. They have heat in their houses, food in their cupboards and a roof over their heads,” said Slezak in a statement through his campaign coordinator. “Give it two years and see where we’re at.”

Dan Kildee is a former longtime Genesee County Treasurer who helped create the Genesee County Land Bank, the first of its kind in the nation, that has served as a model for similar ones in cities nationwide.

In 2010, KIldee formed the Center for Community Progress, headquartered in Flint, which helped promote his vision of improving the quality of life for communities across the country, according to biographical information on his web site. Under Dan’s leadership, the center has helped to revitalize cities across America, improving local and state economies and improving the safety of neighborhoods.

Kildee is a lifelong Michigan resident. He and his wife of 24 years, Jennifer, have three children and one grandchild.

He will be going to Washington D.C. to take over the Michigan Congressional seat being vacated by his uncle Dale Edward Kildee who was first elected in 1976 and has served 18 terms.

Slezak served one-term as state representative in the 50th district, where he was a Democrat. He then ran unsuccessfully for State Senator in 2010 before announcing last year he would seek the 5th District Congressional seat as a Republican.