With sadness and thanks, the retailer reflects on its past 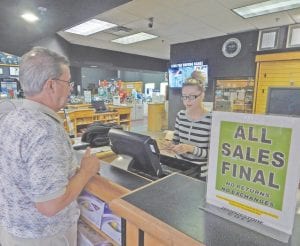 FLUSHING – King Par Golf Superstore, one of the foremost purveyors of golfgear in Genesee County, will close its doors this month after many successful decades in the community.

The business started as a driving range before widening its scope considerably in the 1980s following a wave of market interest in the sport of golf.

Bill Baird, former owner, moved the brands into wholesale merchandising, creating a line of King Par golf clubs primarily under the name “Knight,” and opened two of the store’s most popular attractions – a putt-putt course and an adjacent ice cream shop known as King Kone.

From there, King Par evolved into much more than a location for serious golfers. It was the prime destination for a first date or a casual afternoon with friends.

A new direction as designer and supplier for various retail outlets – Dunhams, K-Mart, Wal-Mart, to name a few – meant the store also became a massive employer. Nigel Matthews, Product Development and Overseas Sales Director, said, at its peak in the early 1990s, the business had around 230 employees to manage the booming operation and assembly line work.

In late 2006, after years of prosperity, Baird decided it was time to sell the business. King Par fell under new ownership, who continued the business model with wholesale business making up a significant portion of revenue. They shifted some of the focus to Internet sales through the company’s official website and Amazon.com.

King Par, however, saw the wholesale business begin to falter. A decision was made in February of this year to sell its four brands – Orlimar, Affinity, Intech and Knight – to a company in California and discontinue wholesale distribution.

“It became evident to us, more clearly in the middle of last year, the wholesale business model was not working,” said Nigel. “We tried to take tactical measures to enable that to continue in a particular shape or form, but it proved unsuccessful.”

Nigel said the brand sale was made in the hopes of preserving the retail and e-commerce business, but the plan proved ineffective. A final decision was made to close up shop for good, and King Par held an indoor tent sale at the end of July to start selling off inventory.

The store – expecting September 15 to be the final day – now has all products marked 70 percent off. King Kone under the jurisdiction of Cops and Robbers Ice Cream and Gift Shop will close at the same time for the season.

“It has been a huge regret to see so many close colleagues leave the business,” said Nigel. “At the end of this exercise, you’re talking about 19 employees losing their jobs.”

The decision was made with a heavy heart. Nigel said he feels gratitude toward the customer base that kept King Par as a staple in the community for so many years.

“I want to give a big thank you to customers old and more recent,” said Nigel. “We’re sorry King Par has had to take this course of action.”