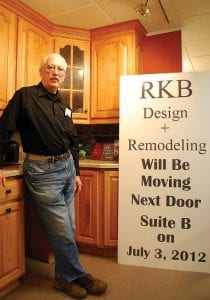 Owner Steven Allen of RKB Design and Remodeling is gearing up to move locations after being in the same showroom/office since 1984. Changes in the economy are responsible for the smaller space.

Owner Stephen Allen, a certified kitchen designer, has been working in the kitchen and bath industry since 1974. He has been in the current location since 1984. The move came about because of the changes in the economy.

“Ten-fifteen years ago we were doing $2 million a year … the total of the last three years I have done maybe $50,000 in new house construction,” he said. “We don’t need the big facilities like we had before out of necessity. With this environment it would be better to control your overhead and have a nice showroom but keep it small and appropriate for the economy.”

The old space is about 4,200- square feet with the new space totaling 1,400-square feet. “It will be a brand new showroom with brand new offices but the same people and same business ethics,” said Allen.

Allen is proud to say his business advertises as the “most professional company” in the area. The business has an in-house carpenter as well as a licensed plumber and licensed electrician.

“We are doing everything to code and everything the right way and most companies don’t do that,” said Allen.

Allen said attention to detail, completeness and thoroughness and taking care of problems when they happen after warranties set RKB apart from the rest of the competition. Allen has a photo album of some of his notable projects.

“We can do a 5- by 7 bathroom or a 1,000 square-foot bathroom. It is whatever our customers want,” said Allen. “That’s what seperates us. We are always thinking outside the box.”

Repeat business and referrals is what makes the business survive. Word-of-mouth is Allen’s best way of advertisement. He also said he does do some advertising to reach out to people who don’t know about RKB.

Allen prides himself on his success in the kitchen and bathroom designing and remodeling business. He goes to school once a year to keep up on the current trends. For more information, visit the company website at www.rkbdr.com.